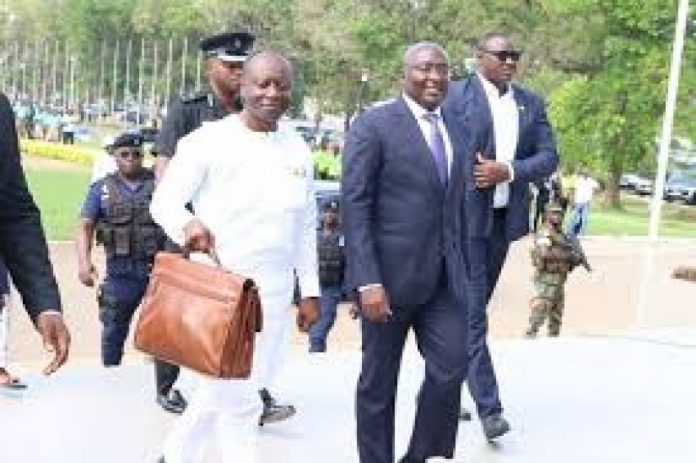 Beginning of 2018 especially in the 3rd quarter, the economy of Ghana has not been a best of shapes as increment hit fuel and the battle between the dollar and the Ghana cedis worsened with a ¢4. 8ps to 1 USD.

The hardship was glaring to the extent that the sitting President, Nana Akufo-Addo admitted in September 2018 that the economy of Ghana is going through some trying times.

Speaking to the Ghanaian Community in New York, USA, Akufo-Addo attributed the difficulties in the system to the “dramatic increase in crude oil prices” and the strengthening of the US dollar.

At a glance of the 2017/2018 budget, which was themed “‘sowing the Seeds for Growth and Jobs’ Government of Ghana sought to boost agricultural production and productivity with some policies like the Planting for Food and Jobs, one District, One Factory, quality education with policies like Free SHS policy and job skills and entrepreneurship.

Also, irrespective of the ‘nuisance’ taxes scraped off after the Presentation of the Asempa Budget, the mid-year review budget in 2018 introduced some taxes including the luxury vehicle levy.

However, ahead of the 2019 Budget presentation on November 15, 2018, below are some key projections;

According to them, the Planting for Food and Jobs policy looked good on paper but was practically weak because it was focused more on the supply of inputs to boost production at the expense of other aspects of the agricultural value chain.

Per the 2018 mid-year Budget, the Government said, Planting for Food and Jobs “our main drive for the economic sector is to improve agricultural production and productivity. “ The Programme is intended to improve work opportunities for all, especially women to improve their incomes and address gender inequalities in line with the Sustainable Development Goals, according to the 2018 Budget.

The government must respond to the 750,000 jobs expected to be created under the Planting for Food and Jobs program, as captured in the Asempa Budget with appropriate statistics in the 2019 budget

One District, One Factory
Work has started on 15 factories under the government’s One-district, One-factory (1D1F) initiative, the Minister of Finance has said.

The Director of Policy Planning, Monitoring, and Budget at the Ministry of Trade and Industry, Mr. Padi Adjirakor was reported to have announced some months ago The government has released GH¢465 million for the commencement of the one-district-one-factory project. It has also released GH¢256 million for the revamping of 100 private commercially viable and distressed companies throughout the country.

The government must brief Ghanaians how far with the flagship program, how many factories have been established so far and how the already established factors are contributing to the development of Ghana.

During the 2018 Mid-Year Budget presentation Minister of Finance, Mr. Ken Ofori-Atta indicated that the government has released GHC30 million to tackle the initial cost of the ongoing Nation Builders Corps programme in Ghana.

He said the GHC 30 million used so far for the initial cost of the programme, is out of the GH 600 million being provided by the government for the implementation of the Nation Builders Corps (NABCO).

Thus, the Finance Minister in presenting the 2019 budget to Parliament must bring to bear statistics showing the state of the program; the number of people posted and the allocations for the beneficiaries for the next fiscal year

According to the 2018 budget, the government allocated some GH¢1.2 billion to the implementation of the Free Senior High School (SHS) programme in 2018.

After a year of the implementation of Free SHS, double track system of admission has also been introduced to regularize the intake of students. With this in mind, more teaching and non-teaching staff have been employed.

A senior research fellow at the University of Education, Winneba, Dr. Daniel Yielpieri, has said the disadvantages associated with the double-track system being proposed for the free Senior High School (SHS) outweigh the advantages.

According to the Educationist, the double-track system could cause social crises who spoke on Accra based Adom FM advanced.

Professor Ernest Aryeetey, former Chancellor of the University of Ghana has advanced that it will cost Ghana GH¢ 3.3 billion to fund the Free SHS Policy in the next academic year.

According to the Economist, the amount, which is exclusive of salaries for staff, is almost thrice the GHS1.3 billion of what was budgeted for the Free SHS in the 2018 budget.

With this, the 2019 Budget must enumerate how the government intends to manage the development, taking into consideration infrastructure, teachers, and feeding of the students for the next academic year.

Trainee teachers Allowance was also pegged at GH¢177,511,600 for 49,032 beneficiaries.
Vice President Dr. Bawumia in March 2018 stated that the government will be considering an upward review of the restored teacher trainee allowance from the current 400 cedis to about 500 cedis.

Dr. Bawumia in response said the government would give the request consideration and ensure it is either increased to GHC450 or GHC500.

Meanwhile, there have been several demonstrations and attempt to demonstrate over the delay and unpaid allowances. In August 2018, the Coalition of Concerned Teachers also threatened to go on strike unless their salary arrears were paid by the end of October 2018.

As the 2019 budget appears in Parliament, It will be of utmost importance to trainees and Ghanaians, in general, to know the fate of trainees whether allowance will be increased as promised

The uncertainties in the Banking industry in Ghana now leave much to be desired as the deadline for GH¢400 million requirement for commercial banks approaches.

Capital Bank and UT Bank collapsed in August 2017 and their assets and liabilities were taken over by the state-owned GCB Bank.

The situation has caused several unexpected panic withdrawals from banks, savings and loans, and investment houses.

And as the Government presents its 2019 budget to Ghanaians through Parliament, it will be prudent for the sector if the Finance Minister announces a one-stop solution to the financial sector vulnerabilities.

Meanwhile, An IMF team led by Annalisa Fedelino, who visited Accra from September 17-27, 2018 advanced that;

The 2019 budget would need to address persistent revenue shortfalls and start tackling decisively the issue of exemptions. Continued progress on fiscal structural reforms—particularly on public financial management and oversight over state-owned enterprises—is instrumental to anchor expenditure control and lasting fiscal discipline. Access to new financing arrangements and longer-term debt instruments would help fund Ghana’s pressing development and infrastructure needs; such arrangements would need to be implemented transparently, deliver value for money, and be consistent with debt sustainability considerations.

Continued prudence on the monetary policy easing cycle is welcome and inflation is expected to remain within the target bands until the end of the year. Recent exchange rate pressures reinforce the call for fiscal discipline. Going forward, improved communication and coordination would help foster deeper and more liquid fx market.

Recent bank resolutions underscore the authorities’ commitment to financial stability and will help improve medium-term prospects for economic growth. While costly for Ghanaians taxpayers, they are nonetheless necessary to address long-standing weaknesses and create a resilient financial system, improved access to credit and financial inclusion. The overall financial system is adequately capitalized, but weaknesses in some institutions—including high levels of nonperforming loans—can adversely impact financial stability, hamper credit growth and investment, and create contingent liabilities for the government. The bank of Ghana (bog) is introducing reform measures to address remaining financial sector weaknesses with the view of improving the availability and affordability of credit to the private sector.