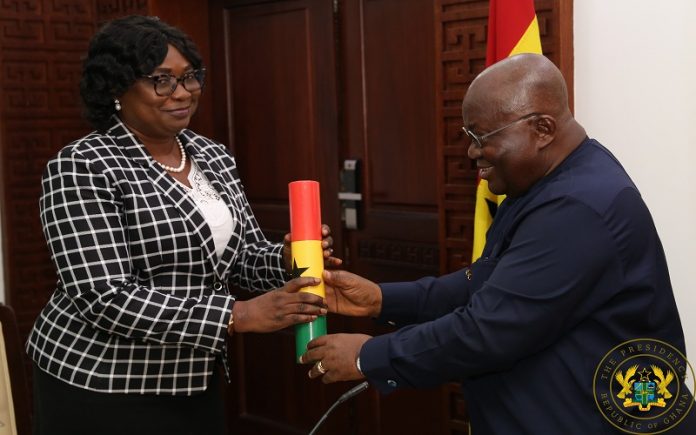 Ms. Naa Torshie Lamptey, a lawyer of over 30 years standing at the Ghana Bar and former acting Director of Public Prosecutions.

Mr. Martin Amidu resigned on Monday, November 16 citing a number of reasons for his resignation.

Mr. Martin stated in his letter to the president that “It is essential for me to state for the purpose of the records, and contrary to public perceptions, that my appointment letter was received on 5th February 2020 (almost two (2)-years after my appointment).

“The copy addressees made no efforts to honour any of the conditions of appointment in terms of emoluments and benefits of the appointment ever since my warrant of appointment was issued on 23rd February 2018 to the date of my letter of resignation. The Deputy Special Prosecutor has also not been paid any emoluments since her appointment, and there is the need to redress that situation for her now that I am out of the way.

“The events of 12th November 2020 removed the only protection I had from the threats and plans directed at me for undertaking the Agyapa Royalties Limited Transactions anti-corruption assessment report and dictates that I resign as the Special Prosecutor immediately.

“I should not ordinarily be announcing my resignation to the public myself but the traumatic experience I went through from 20th October 2020 to 2nd November 2020 when I conveyed in a thirteen (13) page letter the conclusions and observations on the analysis of the risk of corruption and anti-corruption assessment on the Report On Agyapa Royalties Limited Transactions and Other Matters Related Thereto to the President as Chairman of the National Security Council cautions against not bringing my resignation as the Special Prosecutor with immediate to the notice of the Ghanaian public and the world.

“The reaction I received for daring to produce the Agyapa Royalties Limited Transactions anti-corruption report convinces me beyond any reasonable doubt that I was not intended to exercise any independence as the Special Prosecutor in the prevention, investigation, prosecution, and recovery of assets of corruption. My position as the Special Prosecutor has consequently become clearly untenable.”

However, President Nana Addo Dankwa Akufo-Addo vehemently has denied interfering with the work of Mr. Amidu.

“Your accusation of interference with your functions simply on account of the meeting the president held with you is perplexing.

“In exercise of what you considered to be your powers under Act 959, you had voluntarily proceeded to produce the Agyapa Report.

“The president had no hand in your work. Without prompting from any quarter within the Executive. you delivered a letter purporting to be a copy of you report to the president.

“The purpose of presenting a copy of the Agyapa report to the president is decipherable from paragraph 32 of your letter to the president in which you indicated that you hoped the report will be ‘used to improve current and future legislative and executive actions to make corruption and corruption-related offences very high-risk enterprise in Ghana’,” the president said in a statement responding to the accusation against him by Mr. Amidu who resigned from his post on Monday.

Proposed legacies for the consideration of President Nana Akufo-Addo