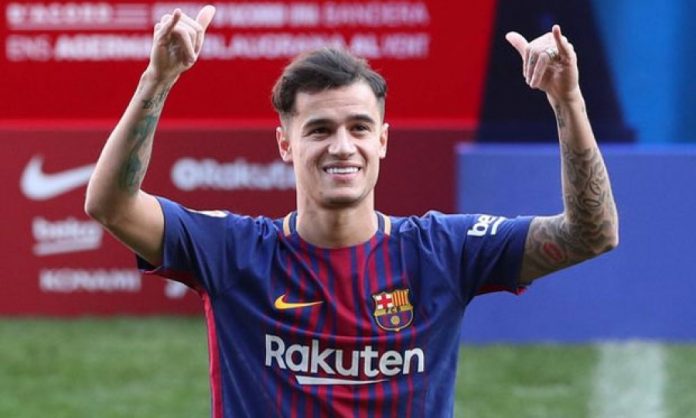 The 25-year-old Brazilian signed a contract in the presence of Barcelona president Josep Maria Bartomeu, before performing keepy-uppies in front of supporters.

A deal for Coutinho to join Barcelona from Liverpool was agreed on Saturday.

“I want to thank the president and everyone who has made it possible,” said Coutinho.

“I am very happy, it’s a dream come true and I hope to be up to the job on the field.”

Meanwhile, Coutinho will be sidelined for about three weeks after his Barcelona medical revealed a thigh injury.

It means that Coutinho’s debut will be delayed and he is likely to miss the upcoming Copa del Rey fixture with Celta Vigo and league matches against Real Sociedad, Real Betis and Alaves.

It means Coutinho could make his debut in the Catalan derby against Espanyol – the club he played in 2012 – on February 4.

The Brazilian midfielder described his move – the second most expensive in football history – as a ‘dream come true’.

After the medical has been completed, the 25-year-old will sign his contract and then officially be presented to the public on the Nou Camp pitch at 12.45pm UK time.

Coutinho made a brief appearance before the cameras wearing a Barcelona tracksuit on Sunday night after their routine 3-0 win over Levante in La Liga.

Addressing fans on Instagram, Coutinho said in English: ‘Hi Barca fans. I am here. It is a dream come true and I hope to see you tomorrow.’

Barcelona finally got their man after failing with three bids in the summer and the five-and-a-half-year deal Coutinho has signed contains a €400m (£354m) release clause.

Only Neymar’s £198m exit from Barcelona to Paris Saint-Germain dwarfs Coutinho’s transfer fee while Barcelona now boast the second and third most expensive players ever after their £134m deal for Ousmane Dembele.

It is also the biggest-ever fee for a player who did not have a release clause in their contract and represents a handsome profit for Liverpool, who signed Coutinho from Inter Milan for £8.5m in 2013.