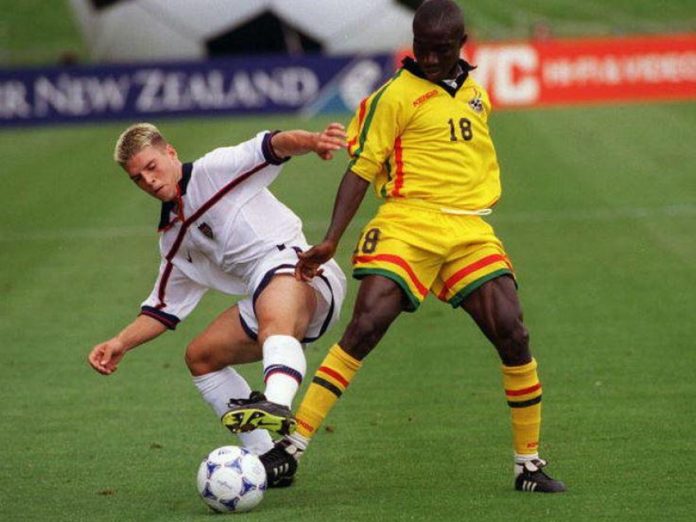 He is brash and has never been afraid to speak his mind in a sporting culture where it is easily misconstrued as arrogance.

Football lovers easily forget it is those same traits that made the Nungua born Bortey the most feared winger in the local league for almost a decade . He scored some of the greatest goals that have been scored in the Ghana Premier league for both Tema GHAPOHA and Accra Hearts of Oak  with such nonchalance that it developed into a myth that he had given himself to the dark arts to achieve his level of consistent excellence .

Talking to him as he sits a few meters away from my desk, he smiles as he recollects some of these moments that fills him with pride and bitterness in equal measure.

“I hate that they think I used juju to do some of the things I did especially at Accra Hearts of Oak. They take away all the hours I spent on the training ground practicing alone as a colts player.

It is not fair you know.

Bortey had an uncanny ability to score from almost anywhere on the pitch. His delivery from a dead ball is as good as any we have seen and let us not kid ourselves that he was doing it in Ghana and not on some hallowed European turf under the spotlight in front of millions. Skill is skill .

Bortey attributes that ability to renowned coach Isaac Paha who worked with him as a boy at Tema Hearts Babies.

“Coach Paha always brought me to training one hour before everybody else just to learn how to kick a ball correctly. He taught me how to take advantage of the direction of the wind and to make quick decisions. I never forgot those lessons and I practiced everyday for years.”

He recalls his favourite goal and smiles. It was a replay of a rained off match between Accra Hearts of Oak and Ashanti Goldfields. Bortey had taken note of Goldfields goalie, Abukari Kankani’s penchant for moving on his line and punished him for it. He lobbed Kankani from 60 yards.

“After the game Kankani came to me and said I had beaten him with juju. He was mistaken. I told him he rather had a poor habit of not standing well in his goal”.

Bernard Dong Bortey came to the fore as a gangly boy learning his craft in Tema . Even though was registered to play in the U-12 team, he would also play for the U-14 during matches. His talent would catch the eye of Wilfred Osei Palmer, who recommended him to the coach of St. Augustine’s College in Cape Coast.

He admits he really had no interest in education at the time but understood the need to get basics for his career.

“I learnt how to read a bit and write at the school.”

Perhaps even more useful were his mates on that school team. Michael Essien, Johnson Amonoo, Razak Ibrahim and a senior class led by Matthew Amoah formed the backbone of that team. All of these players would go on to significant international careers bar Bortey.

He has mixed feelings when he discusses how great he could have been and it’s understandable.

There is no doubt that at his peak he was perhaps the most popular player in the country, able to fill stadiums. He was untouchable and he knew it. He however wanted a chance to prove it abroad with the best of the rest.

“I get angry when I think about this and it is why I have pain in my heart when I talk about Accra Hearts of Oak.”

There were several opportunities to let me go but they always seemed to ask for big money. I went to Lens and I knew it was the place for me. I passed a trial and everything had been agreed at $300,000 only for Hearts to move the price to $700,000. Lens agreed and Hearts increased the price to a million. How was that club going to pay that money for a player they were signing from Ghana?”

Dong Bortey is not known as a softie but he is tearing up now.

“I played against him in the Meridian Cup. I was in the Starlets then and he was playing for their U-20. I put the ball between his legs and he never forgot me.”

The accusations of using voodoo is one that has followed him for years especially during his time of Accra Hearts of Oak and I ask him about it.

“Boss I am a spiritual person. My father was a religious man as well. I pray before games just like any other footballer. I have never used any juju to play football. I played with some of the best footballers in the history of Ghana like Ishmael Addo, Charles Taylor and General Osei Kuffour. What did I need juju for?”

The mention of Osei Kuffour brings a twinkle in his eye as he stands up from his seat.

“Osei Kuffour is my father. He polished me and made me. There was no one better.”

As our chat winds down I ask him if he still has the desire it takes to compete with the young turks of this day. His response is classic Dong Bortey.

“I know am better than all these boys. I just need a coach who understands what I can bring.”