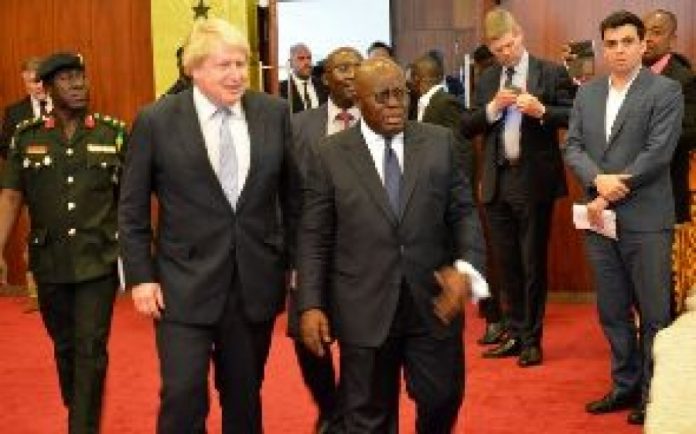 “We hope to have an even deeper friendship going forward and particularly we want to make sure that British firms come here in greater numbers and in greater strengths to invest in Ghana and, if I may say so, take advantage of the fantastic opportunities there are in this country,” Mr Boris noted on Wednesday, February 15 after meeting with President Nana Akufo-Addo at the Flagstaff House.

He emphasised that the UK holds a common interest with Ghana in terms of foreign policy and security as well as ensuring “stability of the region, which affects us in Europe as much as anybody else”.

He admitted that several Ghanaians had contributed to the success of the UK and congratulated Mr Akufo-Addo for the victory of the New Patriotic Party (NPP) in the December 7 polls.

“As you know, I used to be Mayor of London and in our great city we were fortunate beneficiaries of many Ghanaians who contributed massively to our society .We have several MPs in the UK of Ghanaian extraction as you may know and it is a huge pleasure to be able to congratulate you personally, on your triumph and to see your government fluidly underway to meet the challenges the people of Ghana want you to meet,” he stated.

In the company of Mr Johnson was Adam Afriyie, a British with his roots from Ghana who is currently the Member of Parliament (MP) for Windsor and the UK’s Prime Minister’s Trade Envoy to Ghana.