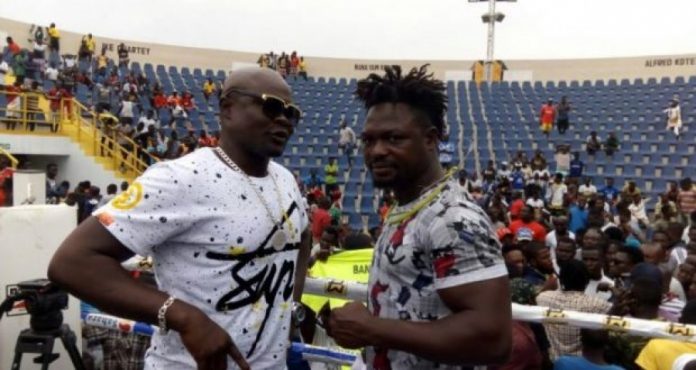 However, the fans including men, women and children did not have it easy in making it into the Bukom Boxing Arena to watch their heroes engage in what turned out to be an anti-climatic battle of words.

First, they had to part with 1GHC at the entrance of the initial conference venue, endure a change in venue to the Arena and face a security search before taking a seat (or stand depending on their preference) in the 4,000-seater facility.

When they finally settled into their places leaving the facility half full, they found their voices again, singing cheer songs with sexually explicit lyrics in honour of their preferred boxer and in some cases to taunt the fans of the opposing boxer.

After bout promotor, Alex Ntiamoah Boakye delivered an apology to pressmen for a three-hour delay to the start of the conference, Banku who had earlier vowed to decimate his opponent on his entry to the facility seized the moment and hugged his opponent, surprisingly stating that they were all friends and were delighted to have the opportunity to entertain Ghanaians.

Samir, 31, was the first to take his turn at addressing the spectators and struggled to excite the crowd with his oratory.

He said: “I want to say that this is boxing… it’s not fight we are all friends and we are going to be together after all this… (sic)”.

“I am going to change boxing image, boxing is my destiny… I am ready for Bukom Banku and after that fight we are friends but for now we are friends”.

When Banku took his turn, the crowd was noticeably much louder and he boldly predicted a sixth round stoppage of undefeated Samir.

“Ayittey Powers will even do better than Bastie in the ring,” he stated in reference to his effortless double over close pal Ayittey Powers.

Banku stated: “I don’t want any petty fights or insults among fans because even what I have not done, they said I did it.

“I want to assure my fans that I will win the fight, I will stop Bastie in Round 6, all Ghanaians know me…”.

The pair of Bukom-based brawlers later engaged in a very jovial face-off.