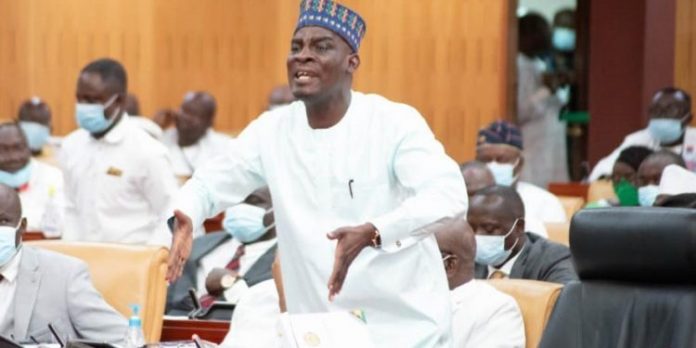 Minority leader Haruna Iddrisu has made overtures to the Majority New Patriotic Party (NPP) to support the Vote of Censure motion against Finance Minister Ken Ofori-Atta when report of the Committee comes to the floor for debate.

According to him, the words in Article 82 of the Constitution do not give Parliament perpetuity to discuss the matter and stressed the House is within defined time limits to consider the Motion.

The Minority leader made the appeal on Thursday, December 1, during presentation of the Business Statement for next week.

The report of the Ad Hoc Committee that investigated the grounds that the Minority is seeking to use to have the House censure the Finance Minister has been laid but has not found expression in the business statement for next week.

Though the Order Paper for the day did not contain the Motion on the Finance Minister, it found space for the Censure Motion against the Health Minister Kweku Agyeman-Manu

Minority leader Haruna Iddrisu indicated that the wording in Article 82 of the Constitution does not give Parliament perpetuity to discuss the matter and stressed the House is within defined time limits to consider the Motion, particularly in respect of the Finance Minister.

He appealed to the Speaker to direct the Chairman of the Business Committee to make provision for the motion during the course of the day next week.

Haruna Iddrisu admitted the attempt to ensure Mr. Ken Ofori-Atta may be an exercise in futility and failure if the Minority does not get the cooperation of the majority.

He said, “If the Majority cooperates, Mr. Speaker, we will be very successful in getting a new Minister of Finance for Ghana and exit Ken Ofori-Atta.”

“If you don’t cooperate our exercise may end in failure because we don’t have the thresholds of the two-thirds majority required of 183. Some people may change their minds after today and come support.

According to him, he wants the vote for the Motion to be taken through the secret ballot for the records so that the Minority caucus will get to be registered where it stood in the course of history and time when the country was subjected to unacceptable hardship.