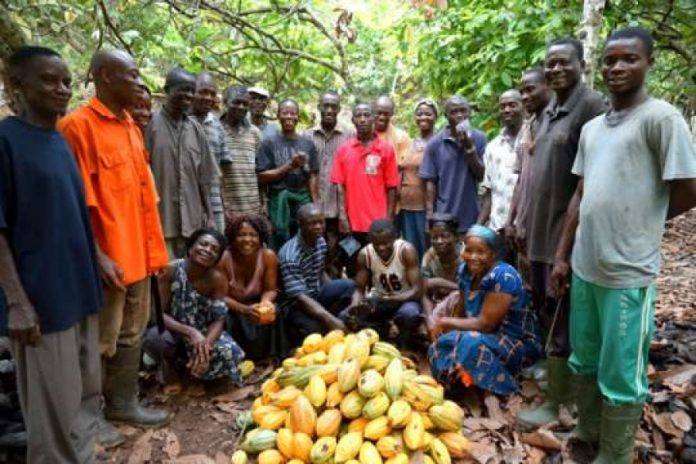 According to the farmers, the GH¢75,000.00 monthly salary of the CEO was too high for a poor nation like Ghana which was currently facing economic challenges.

Making the call at a farmers meeting at Duakon at the weekend, Nana Twumasi Owuyah, a spokesperson for the farmers, stressed the need for government to do something concrete about the issue without delay.

“If one person is collecting as much as GH¢75,000.00 which is equivalent to seven hundred and fifty million old Ghana Cedis a month as salary, then the nation is in serious trouble” Nana Owuyaa Added.

He said that when the news of the COCOBOD Chief Executive’s salary came out, Cocoa farmers in the area became astonished, saying that no wonder that, the COCOBOD always complained of shortage of funds.

“this is a clear testimony that, millions of Cocoa farmers in the country are working tirelessly for only a few fortunate people in the society to enjoy the fruit of their labour, while the actual producers of this ‘golden plant’ continue to wallow in abject poverty’.

He suggested that government should take similar action against Chief Executive Officers of other state institutions and establishments who enjoy huge salaries to the detriment of the country’s ailing economy.

Nana Owuyah appealed to the various Appointment Committees and Boards of State Institutions and organisations to take into consideration the precarious condition of the Country’s economy before approving fantastic salaries for Chief Executive Officers working for the state.

Nana Owuyaa regretted that apart from their huge monthly salaries, these fortunate top officials might also be privileged to enjoy some allowances and free fuel for their cars every month.

He advised heads of state establishments and institutions currently placed on huge salary scales to be considerate, saying that news about COCOBOD’s salaries could undermine their credibility and eventually affects the production targets of the crop in the coming years.

He suggested that the farm-gate price of cocoa should be increased four times the current price to attract more young farmers into the industry.