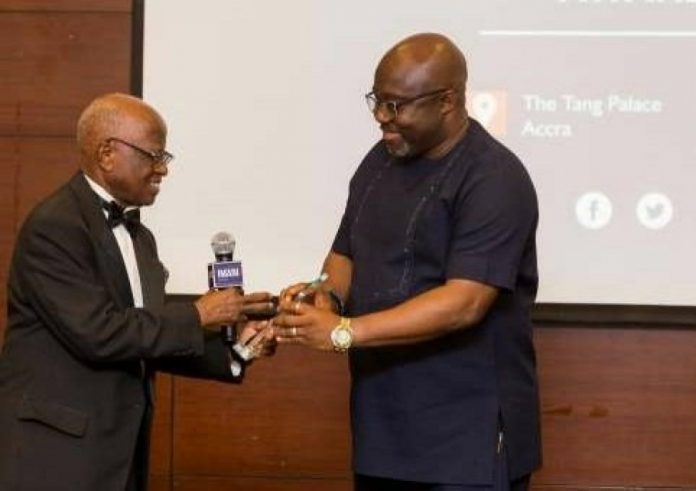 Four other government institutions which were co-winners of that award were the Ghana Investment Promotion Centre, the Gender, Children and Social Protection Ministry, the Food and Agriculture Ministry and Finance Ministry.

This was at the IMANI Ghana Inspirational Public Sector Leadership Awards night, where 45 Ministries, Departments and Agencies were rewarded on the back of the five main pillars of Engagement, Transparency, Social Inclusion, Innovation and Management Effectiveness for the period October 2016 – October 2017.

IMANI Ghana also used the occasion to release its annual public sector performance report, which named the 45 as having performed well.

Deputy Minister for Communications, Nenyi George Andah, who received the award on behalf of the Ministry, said such rare recognition for the Ministry’s work was testimony that they had chartered a new path to truly serving the public.

He urged his fellow awardees to be spurred on by the awards to help the government realise its objective of impacting the lives of Ghanaians in a positive way.

George Andah suggested to IMANI Ghana to include the registration for the Ghana Post digital and property addressing as a criteria for compliance in next year’s awards.

Minister of Communications, Ursula Owusu-Ekuful acknowledged the award and said “We appreciate it and it will spur us on to work even harder next year”.

Since the beginning of the year, government, through he Communications Ministry, has been driving a digital Ghana agenda under the mantra “it’s digi-time in Ghana”.

The digital Ghana agenda, touted as the real foundation on which the economy will take off, has its bedrock being the National Digital Property Addressing System, which begun with the launch of Ghana Post GPS.

The agenda also include the paperless port system, the implementation of the digital National ID system, all of which will support the entirely spectrum of nationwide e-governance system.

Meanwhile, the digital Ghana drive has also seen various agencies under the ministry like GIFEC, NITA, NCA and other taking concrete step to either create the enabling environment for private industry players to key in, or are themselves embarking on digitalization agenda in various forms.

Indeed other state institutions like Ghana Water, Registrar General, Passport Office and others have also digitalized their processes to set the tone for a truly digitized economy.

This is what IMANI Ghana said it finds inspirational about the Communications Ministry, hence the recognition and award.