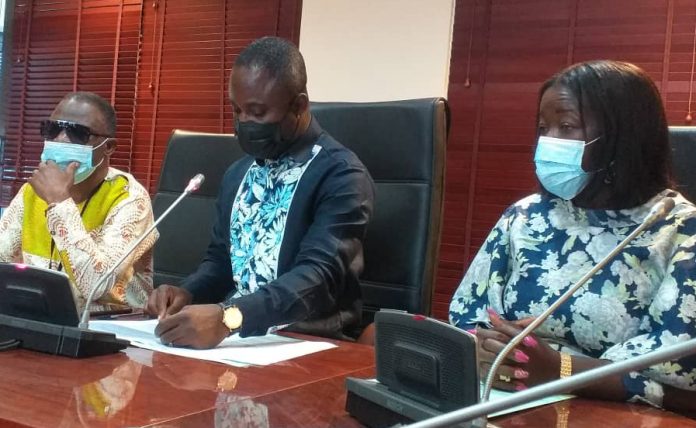 The Minority National Democratic Congress (NDC)  in Parliament has accused the government of playing the numbers game with the lives of the Ghanaian people.

The government, according to the Minority, is not making any conscious effort to bring in the much needed COVID vaccines as pledged but is rather looking for freebies from other countries.

The opposition argued that though Parliament has approved over US$400 million in the 2021 budget for the procurement of 42 million jabs, the Akufo-Addo government is rather slobbering for free vaccines.

Ranking Member on the Health Committee of Parliament and MP for Juaboso, Kwabena Mintah Akandoh, raised these concerns when he addressed journalists on Sunday on what he described as a precarious situation for the country with regards to the second COVID jab.

He averred that the government is in a very confused state particularly now that it has become clear the country is not getting the second consignment of the AstraZeneca vaccines.

He said, “It is a worry to all of us whether or not we are going to miss that, and now the government is talking about Sputnik from Russia.”

“It is a very confused state that we all find ourselves in.”

Mr. Akando observed that though the COVID jab should be consistent and not advisable to use one vaccine at one time and then another at another time, it is better to have none at all.

According to him, the government has been consistent with its tongue-twisting pledges about the vaccines that Ghanaians do not trust and believe any information from the administration any longer.

“We were told we were going to take delivery of the vaccines before 28th April, but today is 2nd May and we do not even know whether we have been able to procure some vaccines at all.”

“They enumerated steps for the procurement of the vaccines and their arrival in the country and they gave us the budget but now government composure is as though it is waiting for freebies.”

“So they will wait until some batches of the vaccines are about to expire and then they run and go for that to bring to Ghana. This government must be proactive and go and procure the vaccines for this country.”

“On the 31st of January and in the 23rd update on COVID-19, President Akuffo-Addo assured Ghanaians that preparations were ongoing to procure 17.6m doses of COVID-19 vaccines for Ghanaians by June this year. Subsequent to which this year’s budget estimates made an allocation of $420m for the procurement of 42 million jabs of COVID-19 vaccines targeted at vaccinating 20 million Ghanaians by year-end,” he said.

The Ranking member argued that not less than GH¢17 billion has been allocated for the fight against COVID-19.

And the Ministry of Health, which has been at the forefront of the fight against the pandemic has been able to account for only GH¢600 million of the money.

He challenged the government to rise from its slumber and warned if the lackadaisical attitude continues and a third wave of the pandemic hits, the consequences would be very drastic for Ghana.

“I do not want to be vindicated when it comes to issues of health but if we continue joking like the way we are doing now, we will have ourselves to blame,” he stressed.