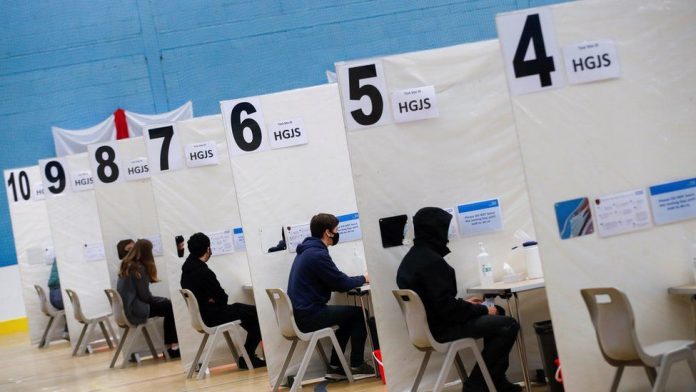 Everyone in England is to be given access to two rapid coronavirus tests a week from Friday, under an extension of the government’s testing programme.

The lateral flow kits, which can provide results in around 30 minutes, will be available for free at testing sites, pharmacies and through the post.

The tests are already offered to school children and their families plus those who have to leave home for work.

The health secretary said it would help squash any outbreaks as lockdown eases.

But critics of the programme say it risks becoming a “scandalous” waste of money.

It comes as Boris Johnson is due to meet the cabinet to sign off the next stage of lockdown easing in England, which will see non-essential shops reopen and pubs and restaurants start serving outdoors from 12 April.

Later, the prime minister will hold a Downing Street briefing, where he is expected to confirm countries will be graded under a traffic light system when international leisure travel resumes.

He is also set to outline plans for coronavirus passports – recording whether people had been vaccinated, recently tested negative or had natural immunity – as a means of enabling mass-audience events to take place in the future.

However, dozens of MPs oppose the use of Covid passports and Mr Johnson faces the prospect of a rebellion among a number of senior Conservatives if he proceeds with them.

The prime minister hailed the plan to offer everyone testing from 9 April, saying: “As we continue to make good progress on our vaccine programme and with our road map cautiously easing restrictions under way, regular rapid testing is even more important to make sure those efforts are not wasted.”

The rapid tests are aimed at those without any Covid symptoms and can be taken at home.

The government introduced lateral flow testing for secondary school children and staff earlier this year, under plans to reopen classes in England by March.

In February, the scheme was extended to the families of all school and college-age children in England.

Kits were also offered to those who cannot work from home in the pandemic, so they can be tested twice a week.

From 9 April, kits will be available through:

Anyone who tests positive using a lateral flow test will be expected to self-isolate along with their household. They can then order a second PCR Covid test, typically used for symptomatic cases, which will be sent off to a laboratory for analysis.

If the confirmatory test comes back negative, their quarantine period is considered over immediately and they can resume normal life.

The schools testing programme, combined with the wider use of workplace testing, has led to a jump in the number of lateral flow tests carried out in England.

There were about 250,000 rapid tests a day taken in mid-February – climbing to more than a million a day by the end of March.

Dr Susan Hopkins, Covid-19 strategic response director at Public Health England, said rapid testing might find cases that would not otherwise be discovered, helping to break chains of transmission and suppress the spread of variants or mutations of coronavirus.

Health Secretary Matt Hancock said: “Around one in three people who have Covid-19 show no symptoms, and as we reopen society and resume parts of life we have missed, regular rapid testing is going to be fundamental in helping us quickly spot positive cases and squash any outbreaks.”

Shadow health secretary, Jonathan Ashworth, said any expansion of the testing scheme must be backed by financial support so people could self-isolate, adding: “Lack of adequate sick pay and support remains a dangerous hole in our defences against this horrific virus.”

The latest data shows that, of the 4.2 million lateral flow tests taken in schools and colleges in the week from 18 to 24 March, 4,502 returned a positive result.

Critics of the programme say that when rates are at low levels, it makes it hard to distinguish between actual infections and so-called “false positives” – an error where the test registers a positive result incorrectly.

“When the prevalence rate of coronavirus falls as low as it is at the moment then an increasing proportion of cases are likely to be false positives meaning that cases and contacts will self isolate unnecessarily.”

Prof Pollock said it is likely that mass testing “is going to do more harm than good. We still haven’t seen an evaluation of mass testing programmes by the government and the UK national screening committee should be asked to advise.”

The government recently changed its policy in England, reintroducing the requirement for secondary school children to take a second PCR or lab test if their first rapid lateral flow test came back positive in school.

The change came after parents and scientists warned some pupils were self-isolating unnecessarily after just returning to the classroom.

The government said that for every 1,000 lateral flow tests carried out, there was less than one false positive result, and the rapid tests were particularly useful at detecting high levels of virus.

In Northern Ireland, a spokesperson for the department of health said rapid testing was recently extended to private sector firms with more than 50 staff, and “consideration may be provided to other sectors”.

The Scottish government said it was expanding rapid testing in hospitals, care homes, schools and in the community to spot asymptomatic cases in high prevalence areas, while also “considering the implications” of the announcement in England.

The Welsh government said 22% of the population already had access to regular rapid testing and this would continue to grow with the expansion of workplace and community testing programmes.