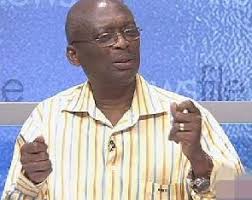 Editor-In-Chief of the New Crusading Guide, Abdul Malik Kweku Baako says the Auditor-General, Daniel Yao Domelovo is not the first and only appointee in that capacity who has been pronouncing things against the incumbent government.

His only problem with Mr. Domelevo is his posture and the way he always run to the media for defense.

“The Osafo Maafo case was brought up and politicize not by the Auditor-General but political interest groups especially”, he opined.

“The acting Auditor-General did not clear Osafo Maafo regarding the Kroll issue recently. My only problem with him [Domelevo] is his posture and ranting”, Mr Baako emphasized.

Mr. Baako added that no position is permanent adding “the Audit Service is a public office, you will come and go, someone will come and also go.”

“To be honest, it is the underlying factors of mistrust and poor relationship he has with the incumbent government that has triggered this”, he pointed out.

“You cannot say because you are busy doing a report for parliament and two because your secretary mix it [report] with other papers, it took you one month to respond to a court obligation” Mr. Baako expressed worry.

Mum-of-three rents husband out for £40 an hour: Says ‘business is booming’