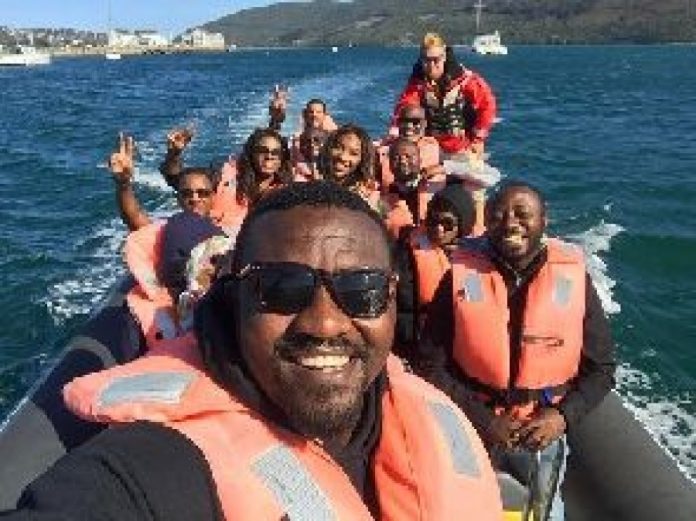 According to him, the security agencies are building a docket from which he could be hauled before court and charged for the offence of stealing.

But the actor who seems unperturbed about threats of being prosecuted is seen holidaying in tourist sites in South Africa and sharing images on her facebook page.

He indicated on Friday afternoon that he was in Cape Town and later visited the Robben Island all in South Africa.

National Security operatives it would be recalled allegedly caught the actor, who was part of the failed campaign to get John Mahama elected for a second time as president, with a vehicle belonging to the state, and retrieved one of them from a spraying shop at Abelemkpe, Accra, recently.

The second V8, ash in colour, which John Dumelo allegedly claimed was in possession of his girlfriend, is currently being pursued by the operatives.

When news broke that one of the two V8 Toyota Land Cruisers classified as missing from the pool of state vehicles had been retrieved from John Dumelo at an auto mechanic’s shop, he allegedly took to Facebook, a social media platform, to rubbish the publication, claiming that he bought the vehicle impounded by the state.

He posted, “I have not granted any interview both private or public to which I mentioned the name of the first lady for buying me a V8,”

He continued, “I bought the vehicle myself; I never said it anywhere that Madam Lordina bought it for me. I have in my entire NDC life met her Excellency only once at a public event. Treat any publication that tries to link my purchase of a V8 to the former first lady as trash.”