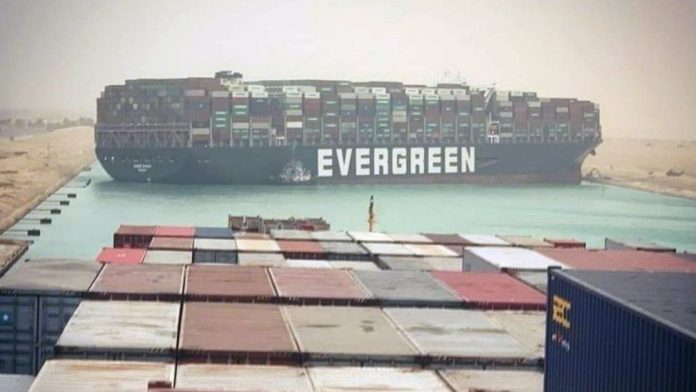 Dozens of vessels are stuck after a giant container ship became wedged across Egypt’s Suez Canal, one of the world’s busiest trade routes.

Rescue boats are working to free the 400m-long (1312ft) vessel, which was knocked off course by strong winds.

Egypt says it has reopened the canal’s older channel to divert traffic, amid fears it could remain blocked for days.

The incident has already created long tailbacks on the waterway, stopping dozens of other vessels from passing.

About 10% of global trade passes through the Suez Canal, which connects the Mediterranean to the Red Sea and provides the shortest sea link between Asia and Europe.

The Ever Given, registered in Panama, was bound for the port city of Rotterdam in the Netherlands from China and was passing northwards through the canal on its way to the Mediterranean.

The 200,000 tonne ship, built in 2018 and operated by Taiwanese transport company Evergreen Marine, ran aground and became lodged sideways across the waterway at about 07:40 local time (05:40 GMT) on Tuesday.

At 400m long – the length of four football pitches – and 59m-wide, the ship has blocked the path of other vessels which are now trapped in lines in both directions.

A tracking website, Vessel Finder, shows the build up of marine traffic on both the northern and southern sides of the blocked waterway.

Evergreen Marine said the ship was “suspected of being hit by a sudden strong wind, causing the hull to deviate… and accidentally hit the bottom and run aground”.

The Suez Canal Authority (SCA) said it was working to refloat the giant ship, using rescue and tug units, according to AFP news agency. Its chairman, Admiral Osama Rabie, also said they had reopened an older section of the canal to ease the bottleneck of marine traffic caused by the incident.

Diggers are also working on the ground to try to free the ship, which is wedged into the side of the canal bank.

Dr Sal Mercogliano, a maritime historian based in the US state of North Carolina, told the BBC that incidents such as this were rare, but could have “huge ramifications for global trade”.

“This is the largest vessel ever to go aground in the Suez Canal,” he said, adding that the ship got lodged in the embankment and would have lost power and its ability to steer.

“If they are unable to pull her free… in a high tide, they are going to have to start removing cargo.”

Julianna Cona, who says she is on board another ship located directly behind the Ever Given, wrote on Instagram: “Ship in front of us ran aground while going through the canal and is now stuck sideways looks like we might be here for a little bit…”

Experts warn the operation to move the Ever Given, which could include removing large amounts of sand from around the areas where the vessel is grounded, may take days.