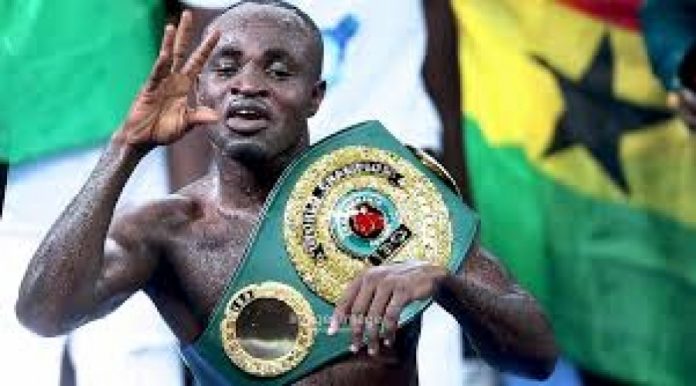 Tagoe successfully defended his world title courtesy a round 6 TKO over Fernando Saucedo of Argentina in Accra last Saturday, January 27 which was attended by the Zylofon Media chief with his star artiste, Shatte Wale. Both Mr. Mensah and Shatta are big fans of the boxer and mounted the ring to congratulate Tagoe moments after the fight ended at the Bukom Boxing Arena.

It’s not clear yet if the Zylofon Media boss wants to sign the boxer managed by star footballer, Asamoah Gyan but his gold dealership company, MenzGold branded the apparel of Tagoe on the fight night and promised to reward the boxer for retaining Ghana’s only current world boxing title.

Shatta Wale who was only last week unveiled as a new signing to the Zylofon Music label, also showed support for Tagoe by spraying the IBO Lightweight champion with loads of cash in the ring just after the win over Saucedo much to the surprise of many, not least Tagoe himself.

“I am grateful for the support of my boss Nana Appiah Mensah and Shatta Wale, they surprised me by not only coming to the fight but even entered the ring to celebrate with me,” Tagoe said.

“I appreciate the love shown me and the car he has promised to give me but I know he can do even much more which is just the motivation I need to train harder to unify the titles to make them and my BabyJet team and all Ghanaians proud,” Game Boy added.

The fastest rising media empire in Ghana, Zylofon Media has 4 branches in Accra, Tamale, Sunyani and Kumasi with a UK branch also set to be opened soon.