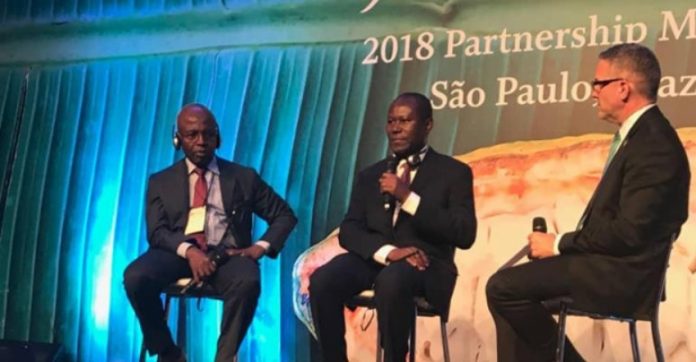 Speaking at the ongoing World Cocoa Foundation meeting in Sao Paulo, Brazil, Chief Executive of Ghana Cocoa Board (COCOBOD), Joseph Boahen Aidoo said the harmonisation of the trading systems would help the two countries in their quest to take a strong position on deciding the price of cocoa on the world market.

The head of Ghana’s cocoa regulator indicated that the major driving force for the collaboration of the two countries is the price.

The World Cocoa Foundation partnership is a meeting of all major and minor stakeholders in the cocoa industry.

The two countries have been collaborating in recent times on how to improve the income of farmers, but the difference in their respective trading systems has become a major setback.

It’s understood the both countries would not sell cocoa below the floor price.

Cocoa producing countries have been sharing less than three percent of money in the cocoa value chain.

Mr Aidoo said, “It’s unethical, unfair and we cannot talk about the sustainability of the industry when we are not paying commensurate and rewarding price to farmers.”

He also revealed that a technical team had been set up by the two major cocoa producing countries to come out with the true cost of production per tonne which they believe would serve as the basis of setting the floor price.

The chief executive of COCOBOD further indicated that all other producing countries would be engaged to be part of such a major revolution in the industry.

Mr Aidoo further announced major achievements made as a result of engagements between Ghana and Cote d’Ivoire initiated by Presidents Akufo-Addo and Alassane Ouattara respectively.

He said that the two countries started dealing with the problem of cocoa swollen shoot virus disease by launching a joint programme some two months ago.