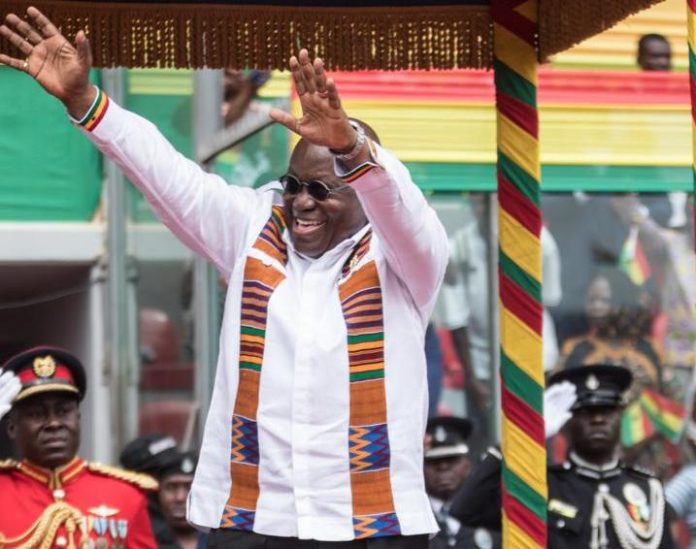 President Nana Addo Dankwa Akufo-Addo has stated that freedom and the cultivation of democratic values have strengthened the determination of the Ghanaian people to create a new state that is neither poor nor the victim of the world order.

He observed, however, that the biggest challenge is how to keep the nation on the path of sustained progress and prosperity.

The government, he said, has done a considerable amount of work since 2017 to achieve this objective.

He averred that as a result, the state had one of the fastest-growing economies of the world to become the largest destination for foreign direct investment in West Africa.

“Global automobile companies are setting up shop in Ghana or have expressed their desire to do so,” he stated.

Speaking at the commemoration of Ghana’s 64th Independence anniversary at the Jubilee House on Saturday, President Akufo-Addo stated that Ghanaians have far more self-confidence today.

He noted that the testament to rule of law, respect for individual liberties, human rights, principles of democratic accountability, dictates of state social justice have deepened for the common benefit of the Ghanaian.

More Ghanaians, he said, have a firm belief the state can make it if they work hard enough.

The government, he said, has continued to guarantee the basic tenets of social justice and access to education and healthcare for all Ghanaians.

President Akufo-Addo argued that Ghana has become self-sufficient in food production and for the first time in a long while it is exporting her surpluses to neighbouring states.

Sustained efforts to digitization, he said, are being made to formalize the economy and hasten the critical journey of industrialization and value addition activities whose results would create jobs for the teaming masses.

President Akufo-Addo averred that successful Ghanaian diplomacy has enabled the African Union to agree to the location of the secretariat of the African Continental Free Trade Area to Accra.

“Arguably, this is the most important initiative of the African Union since its foundation.”

“This is the first time since Independence that we have had the privilege of playing host to a major pan-African institution.”

The single African market, he said, will present Ghanaian enterprises and businesses with a huge opportunity for the rapid development of the Ghanaian and African economies.