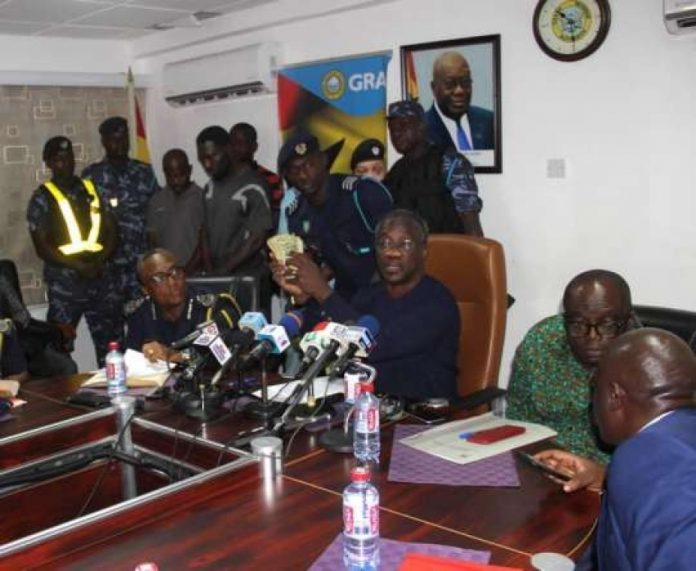 The goods, made up of 2,000 cartons (12xIL) of Don Garcia Wine and a 1,000 cartons of Simon Sangria Wine, attracting a duty liability of GH¢88, 957.47, were removed from their warehouse located at the Tema Free Zone Enclave.

The GRA arrested the four on Friday night upon intelligence that the consignment, released for export to Paga the previous day, had been diverted and were being discharged at Nungua.

The truck and its contents have been detained pending re-examination and proper re-assessment.

Mr Nti explained that on November 6, 2018, a licensed Customs House Agents, acting on behalf of Comet Ghana Limited, a registered Free Zone Operator with no. F003, lodged a declaration with number 92018485496 in the Ghana Customs Management System to export the consignment of wine to Paga.

However, the truck that was mounted with E-Track Device with number 612788 obtained and allegedly fixed by technicians from Magnate Technology Limited and upon an approval, granted for the export by Jonathan Aniewu, Officer-in-charge, Free Zone, was noted to have never reached Paga.

Mr Nti said when his surveillance team arrived at Nungua where the goods were being discharged, it was detected that the seal had been opened with its key, and so the Authority was investigating to discover the person who provided the key to the principal suspect, Samuel Agbah, who tried to bribe the officials with GH¢2,000.00 with a promise to add some more subsequently.

He said the suspects, who were first handed over to the Marine Police for interrogation and detention, would be put before court soon for prosecution.

He gave the assurance that the manager of Comet Ghana Limited who is yet to report to the GRA would be located.

He later noted that a detailed examination of the GCNet system has revealed that from September 1, 2018 to date, Comet Limited had engaged in 39 exportations and so these exportations would be subjected to further investigations to determine whether those goods indeed reached their destinations or not.

Comet happens to be one of the four registered Free Zones companies operating duty free shops at various border posts across the country including Osei Kojokrom, Elubo, Aflao, Gonokrom and Paga.

Duty Free shops do not pay taxes on their imports.

Commenting further on the impact of such an activity on revenue mobilisation, Mr Nti said such acts derail efforts at mobilising revenue since those who divert such Free Zones goods back to the main market to compete with others that paid taxes on their imports cheat the system.

He has, therefore, warned such persons to stop those negative acts, saying the GRA was determined “to use all legitimate means to achieve the 2018 revenue target and will, therefore, removed all obstacles militating against this objective”.

Announced that effective December 1, 2018, all Duty Free shops would have to pay customs duty and taxes at the time of importation of goods and apply for refund explaining that the position would help check abuse of the regime.