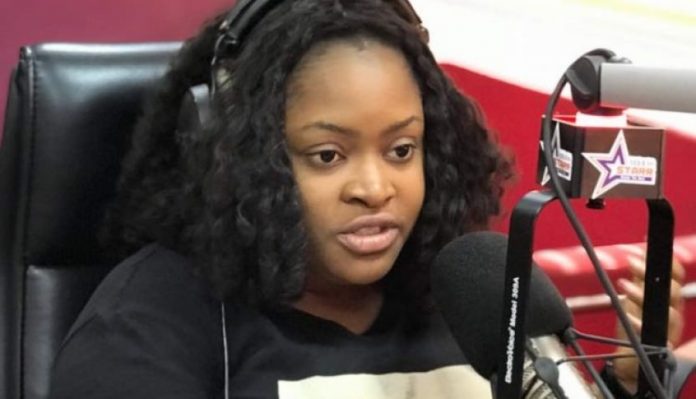 Speaking on Morning Starr, Tuesday, January 09, 2018, the eloquent Comedienne stated she has entertained all sorts of invectives, but had to wear a thick skin to breakthrough.

“Others made me feel I didn’t have sense when I started comedy,” Jacinta opined in the segment dubbed ‘Gender 101‘.

She averred she made a conscious effort to educate herself to the tertiary level in order to rub shoulders with her contemporaries.

“People said nice girl like you, why do you want to fool. I look at people like Basketmouth [a Nigerian comedian] and I see that they are learned. I’m not into comedy because I don’t have anything to do, I have something to fall back on. I can’t be on stage for life. A time will come I have to move into consultancy or become maybe the president and I don’t want people to search for my certificate and will not find it.”

According to Jacinta, her aspiration was to become “a motivational speaker because I felt people dwelt too much on issues. And I wanted people to smile.”

However, her mother convinced her into comedy having realized her humorous jokes at home. She said she has never regretted her decision although comedy as a career never crossed her mind as a child.

“I never saw myself as a comedienne … later when I decided to go into comedy I told myself I’ll go to school. I attended a Comedy Club in 2012 to launch my career.

“I didn’t feel comedy when I came to Ghana. GhOne TV did an auditioning for comedy and that was the deciding moment. I was scared. I made it to the top 20 but couldn’t make it further and returned to campus to do “my thing.”

“Later I met David Oscar who took me to a Comedy Club and I teamed up with DKB for corporate comedy series among others. I had my first TV interview on GTV… I’m still growing,” Jacinta, who is a fixture on Starr FM’s weekend entertainment show Morning Zoo, stated.

She encouraged young females, hoping to take comedy as a career, to “be natural, confident, and God-fearing.”

She added: “You’ll be exposed to a lot of things. If you don’t have what you stand for, you’ll fall for everything. You’ve to be original. Nothing is new anymore, but there must be originality in it.”

Born to Alex Dzabaku Ocansey and Eucharia Ocansey, Jacinta is the first and only daughter of her parents. Her younger brother is called David. Her father is a building constructor while her mother works for SOS Ghana.

Jacinta has bagged some awards including Ghana Tertiary Awards 2016 Most Influential Student Comedian, Most Popular Student and Most Entertaining Student.