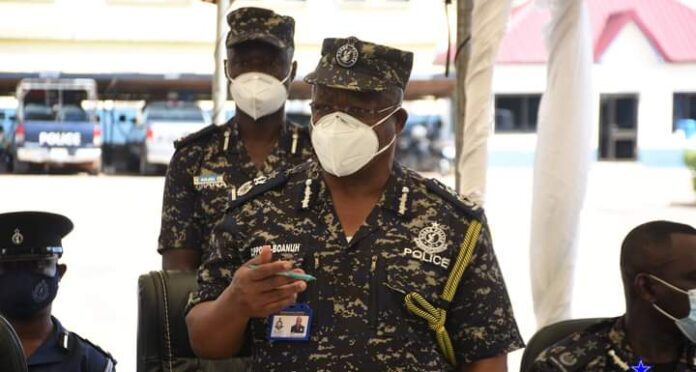 The Inspector-General of Police, James Oppong Boanuh has fired back at his critics saying his administration is not sleeping on the job but remains committed to fighting the increasing spate of crimes in the country.

His comments follow the call by Security Analyst, Adam Bonaa on him (IGP) to retire after armed robbers shot dead a police officer, an eyewitness, and injured a bullion van driver at Adedenkpo, a suburb of Jamestown in Accra on Monday.

Speaking on Top Story, Monday, he said the failure of the police to curb the increasing robbery cases can be ascribed to the non-replacement of aged police officers with young and energetic ones who can introduce innovative ways to fight the ongoing menace.

“I am putting the blame at the doorsteps of the Police IGP and I am advocating that he should go, he has reached retirement age, they have given him two extensions so he should go home for more enthusiastic, energised officers who are within the 60 years limit to take over and probably put a bit more enthusiasm into the Ghana Police.

“When was the last time we saw any serious reshuffle? police operation reshuffle, commanders being moved left and right, nothing,” he added.

But speaking to the media on the sidelines of a visit to the slain policeman’s family to commiserate with them, the IGP stated that any security analyst who accuses the police of sleeping on the job is uninformed.

“…We are doing what we can to protect the people of Ghana. There’s no society in the world that there’s no crime. Even in the US, UK, Sweden, and all those countries where I will say more or less, they have everything they still have crimes. The only place that doesn’t have crime is Heaven, and we are not in Heaven.  So if any so-called security analyst is saying that we are not on top of our game that is why these things are happening then he doesn’t know what he’s talking about.”