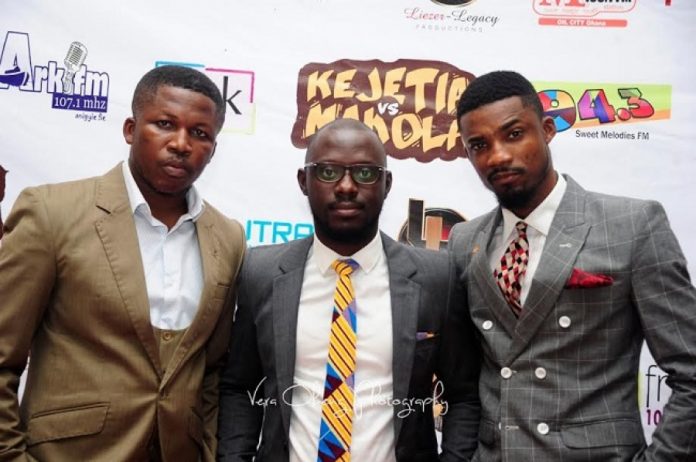 “Kejetia Vs Makola” is an urban satirical show and a subversion of the Law Procedural genre. The first of its kind on Ghana TV, it follows the amusingly unconventional legal battles between a band of misfit lawyers claiming to have been trained in law at a certain Ghana School of The Law somewhere at Kejetia and their colleagues from Ghana School of Law at Makola.

The show is generating all the rave reviews and interesting banter on social media especially, and for the first time in the 2 or so years of ‘Kumkum Baghya’ dominance, the attention is all fixated on a local production.

Invariably bizarre and outrageous cases appear before the court, presided over by a young, hip, eccentric and fun-loving judge, whose views on the cases are not always normal, nor are his judgments. Logic and realism are mostly abandoned by the judge and the Kejetia Lawyers for the sake of a joke.

Liezer-Legacy Productions, producers of the sitcom, are overwhelmed with the positive public response to the episodes thus far.

“The main idea of setting the comedy in a courtroom is a novelty with the objective to address issues that concern us as a people,” explained Louis Lamis, CEO of the production house in an interview with 3news.com. “We want people to gradually warm up into the concept, accept the court, accept the jokes that come out and then we follow up with the strong messages that will come out with the trials.”

The sitcom sits perfectly with the quest to promote local comic productions for television. “The entertainment industry has longed for something like this; different and compelling to make patrons laugh and release the stress of work and general life challenges,” said Louis.

Produced by Liezer-Legacy Productions and supported by JOY Prime, ‘Kejetia Vs Makola’ shows every Saturday and Sunday at 5:30pm