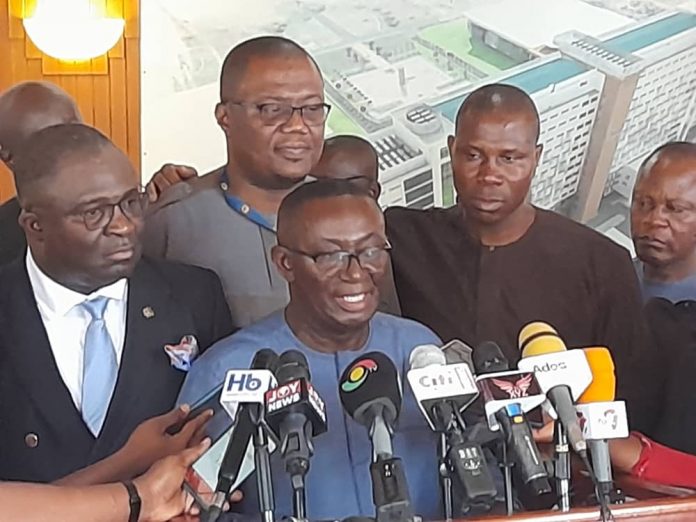 Spokesperson for the New Patriotic Party (NPP) Members of Parliament from the majority caucus, demanding the removal of Mr Ken Ofori-Atta as Finance Minister has reiterated their stance not to participate in the 2023 Budget hearing and passage if President Akufo-Addo insists on keeping him in office.

Andy Kwame Appiah Kubi, who is the NPP MP for Asante Akyem North said per their consultation, the majority of their constituents and NPP members are in agreement that, Mr Ofori-Atta should be removed from office.

He said the members disagreed with the suggestion that it is only Mr Ofori-Atta who can present the 2023 Budget.

“If he is not there, can’t others present the budget, no one is indispensable” Mr Appiah-Kubi questioned in a radio interview on Accra based Oman FM monitored by Graphic Online on Monday morning (November 21, 2022).

“We have lost confidence in him because in the 2022 Budget, he [Ofori-Atta] promised that with an E-levy and Property Rate, there will be no need to go to the IMF for support… As we speak now, that has not happened, and the property rate is even yet to take off.”

“We are not convinced that it should be Ken Ofori-Atta and nobody else,” Mr Appiah-Kubi added and insisted it is their “political decision” that Mr Ofori-Atta must go for “the collective interest” of the NPP.

Why we don’t support vote of censure

Mr Appiah-Kubi reiterated that his group still stand by the position that the vote of censure being spearheaded by the Minority side would not yield any results since after that move, they will still need to appeal to the President to remove him.

He said their reason is not “that of mismanagement of the economy”, rather public confidence in him has gone down for him to lead as Finance Minister.

However, a former chairman of the Finance Committee of Parliament, Dr Mark Assibey Yeboah has stated it will be “suicidal” to remove Finance Minister Ken Ofori-Atta from office “at this crucial hour.”

He, has, therefore appealed to the New Patriotic Party (NPP) Members of Parliament (MPs) demanding his removal and have indicated their readiness not to support the 2023 Budget hearing, debate, approval of the estimates and the passage of the Appropriations Bill to reconsider their posture.

He said time was of essence since the rules surrounding the budget is clear that it ought to be presented to Parliament on or before November 15 every year.

Already, one week has passed as of November 21, 2022, and ideally, about six weeks is needed to do a thorough job on the budget consideration.

He said when it comes to the Budget reading, it is possible anybody at all can read it provided the person was a Minister of State, but the chunk of the thorough work demands that the Minister and his team must lead – debate, approval of estimates and passage of Appropriations Bill.

“It will be suicidal for the minister to be taken off at this crucial hour,” Dr Assibey Yeboah, himself a former MP for New Juaben South said in a radio interview monitored by Graphic Online on Accra based Oman FM on Monday morning (November 21, 2022).

This is not the time for that, “to what end, what will it profit us. Even if a new minister is nominated today, it will not take this short period to vet and swear that person into office. That person is likely to be sworn into office in 2023. The deputy ministers can also not perform the function of the substantive minister, Parliament can even decide not to hear a deputy minister,” Dr Assibey Yeboah added.

He said the minister will be needed at the committee level to defend the budget and therefore there is no need to create a vacuum.

He said if the budget estimates and the Appropriations Bill is not done by December 22, 2022, it will disturb the entire nation and therefore Mr Ofori-Atta should be supported to carry this through so that when it gets to January 2023 and the President decides to remove him, it will not create any inconveniences for the country.

“As to whether Ken Ofori-Atta should be sacked or not, seriously I don’t have an opinion on that one, I leave it to the President to remove or maintain him,” he added and insisted the stance of the NPP MPs were problematic as some of them were “personalising” the issues.

For now, let us get this out of the way, he said.