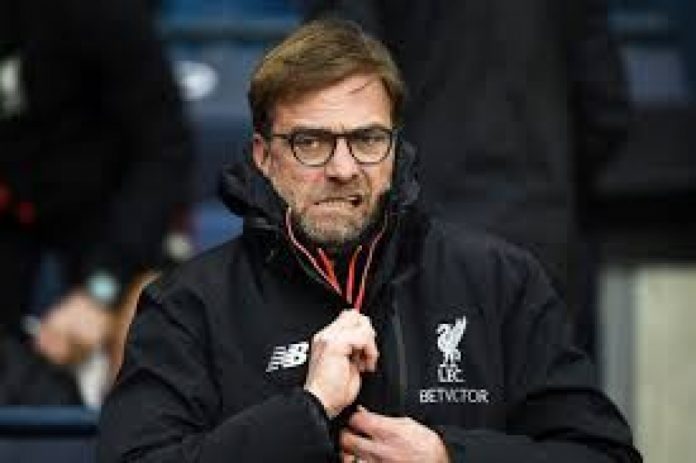 Klopp was still visibly angry at what he saw as the unjust loss of two points, with Liverpool’s fans also enraged at the final whistle after thinking Mohamed Salah’s brilliant injury-time solo goal had given them a win that would have taken them five points clear of Spurs in the race for a top-four spot.

“The game was very intense between two really good teams. There were some real challenges in the first half, lots of moments when it could have been a free-kick but the referee said ‘today that’s the game, that’s allowed’ and then the softest touch in the whole game decides the game. It is not a penalty, it is a situation,” said Klopp.

“I am angry but I can’t change things so what’s my job? To create headlines? To get punished? To pay a fine? If I said what I think I would pay the biggest fine in world football. That makes absolutely no sense.”

Liverpool were also angry at the first penalty award when Kane was brought down by goalkeeper Karius, although Dejan Lovren’s touch had played the striker onside.

“There is a lot of discussion about whether it is offside, yes or no, but I think it was offside as well.

“You could just see him making that dive. The referee made his decision together with the linesman. It was good for us that it got saved.”

‘I would love to blame the whole world’

Klopp, however, was inconsolable as he clearly believed Liverpool had been denied the win by the late intervention of referee Moss and his assistant Edward Smart.

“I’ve heard Lamela was offside with one leg, running into Virgil van Dijk. Virgil sees him at the last moment, stops the movement but still touches him. Lamela is already on the way down,” added Klopp.

“The referee says keep on going, and the linesman makes the decision. That’s how it is. That’s what everybody saw.”

The second penalty was awarded by Moss on the advice of his assistant, adding to the frustration Liverpool felt after they thought Salah’s second goal was going to prove decisive.

“It’s not about who is where. In the 93rd minute you whistle a penalty when you are 100% sure. There were no other incidents in the box apart from the Dele Alli situation, which was not given,” said Klopp, after the England midfielder was booked in the second half for diving.

“It’s clear in these situations the opposition wants to go down, wants to cause these type of problems. Cool down. But we have to accept it, I can’t change it. But it’s really hard to take.”

On the second penalty, Klopp added: “Did you see the linesman? He was immediately on his way. He was sure. I would love to blame the whole world but I can’t blame Jon Moss.”

It was the final act of a dramatic encounter in a typically thunderous Anfield atmosphere, with Liverpool holding sway and creating the better chances in the first half, leading through Salah’s goal.

But Spurs showed commendable resilience and calm to dominate large portions of the second half before Victor Wanyama struck a powerful equaliser 10 minutes from time, returning Karius’ punch back into the top corner in front of the Kop from 25 yards.

Salah’s breathtaking Lionel Messi-style second looked to have settled the game until that late controversy which left Klopp cursing his luck and Spurs counterpart Mauricio Pochettino praising the character shown by his side as well as the officials.

“I congratulated the referee for showing that sort of character,” Pochettino said. “It was difficult to know at the time if they were right but in the dressing room I confirmed that they were right in every single decision.

“Sometimes we complain about them. I don’t as I decided a long time ago to stop complaining. It’s important to recognise when they are right because it’s a very difficult job for them.”

It was a match of high-quality between two sides swathed with positive intent and a draw was a fair outcome – although Klopp’s dark mood suggested he would be very happy to have a long debate on that point.

The results suits Spurs more than Liverpool because in the final reckoning the late action in front of the Kop ensured they did not fall further adrift of Liverpool.

Kane’s ice cool finish – testimony to his own strength of character after a poor penalty just a few minutes earlier – means the gap now stands at just two points.

If the Premier League title has already effectively been decided in favour of Manchester City, then this thriller was evidence that the battle for those remaining top four places could go down to the wire.