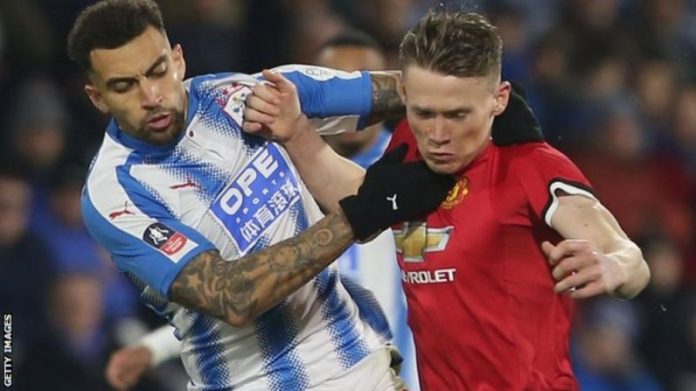 The Lancaster-born 21-year-old, who qualifies for Scotland through grandparents, made his United first-team debut last season and started the FA Cup win at Huddersfield on Saturday.

Speaking to MUTV – and making a phone gesture – Mourinho said: “Because it looks like England is missing him, if I was Alex McLeish, the first thing I would do would be to come to me.”

McTominay has now made 14 appearances for the Premier League club, eight of them starts, and Mourinho believes he deserves international recognition.

“I think Scott deserves more than what he is getting,” the Portuguese said after a 2-0 win that took his side into the quarter-finals.

“Maybe it’s because he’s this kind of kid profile: a normal haircut, no tattoos, no big cars, no big watches, humble kid, arrive in the club when he was nine or 10.

“He has now played already, I don’t know, seven or eight 90 minutes – he’s not played five or 10 minutes – in every competition: Champions League, Premier League, FA Cup, Capital One Cup.”

McTominay, who has been with United since the age of five, has not represented England or Scotland at youth level.

In November, he told Scottish FA performance director Malky Mackay, who was in caretaker charge of the Scotland squad for their friendly against Netherlands, that he had yet to decide on his international future as he focused on establishing himself at Old Trafford.