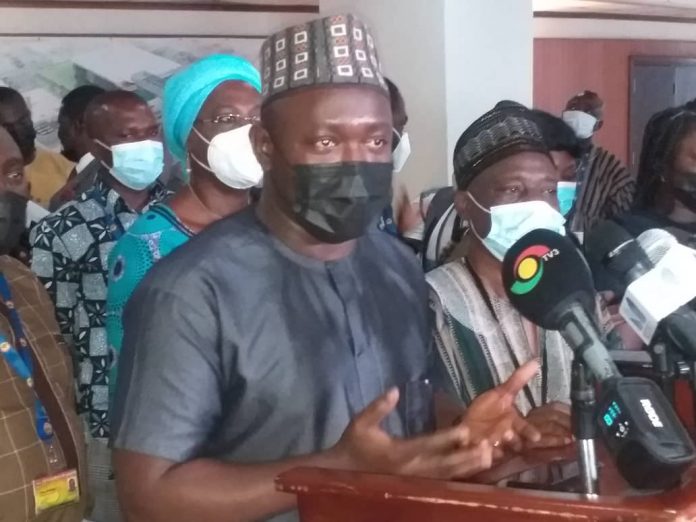 Parliament on Wednesday 23rd June 2021 adopted the 8th Report of the Appointments Committee and approved the nominations of four more deputy-Ministers designate.

The approval, however, did not go down well with the Minority who stated a walkout in protest because some of the nominees were vetted on the Green Ghana Day on 11th June when their members were in their constituencies.

They argued the Chairman was unfair to their members on the Committee when he defied a directive by the Speaker that all activities of the House be suspended to enable members to fully participate in the greening Ghana exercise.

The side insisted they will not support the four nominees and will not be part of the debate on the motion and walked out.

MP for Tamale North, Alhaji Alhassan Suhuyini, afterwards noted that the Committee Chairman’s action was insincere and very disrespectful not only to the Minority members but to the Speaker.

According to him, the Committees that work in Parliament work at the pleasure of the Speaker, and if he wants them to work during holidays or recess he makes it clear.

“On 11th June, the Speaker gave no exclusion and directed all MPs to go back to their constituencies to support the government programme of greening Ghana.”

Leadership of the Minority, he said, conveyed to the Chairman their decision to obey the Speaker’s directive and requested the 11th June vetting be postponed even if it meant the Committee took five nominees a day afterwards to fast track the exercise.

“This, I believe, was a reasonable suggestion from a side that does not intend to frustrate government business.”

“Unfortunately, the Chairman of the Committee decided to convene a meeting of the Appointments Committee without the presence of the Minority on the Friday of 11th June. As members of the NDC side on the Committee we believe they did so out of disrespect, not just to us but even disrespected the Speaker of Parliament.”

The side, he side, will petition the Speaker to direct the Committee to revert the vetting and recommendations of the nominees.

Former Minister for Housing and MP for Abuakwa South, Samuel Atta Akyea, in a sharp rebuttal indicated that the schedule of the Appointments Committee predated the Speaker’s directive on the Green Ghana Day hence the Committee was compelled to sit.

“It will be an utter bad fate for the Minority to say by reason of the tree planting they are unable to come to do their parliamentary duty and therefore the whole program of the Committee should be cancelled.”

Mr. Atta Akyea argued that the fundamental is not about the vetting of the nominees but whether they satisfy the demands of Article 94 of the 1994 Constitution.

He stressed that it is not a rule of the thumb that if the Committee does not congregate at a place and vet a nominee that is the end of the matter.

He urged the Minority to recognize and admit they were derelict on their Parliamentary duties as members of the Appointments Committee.