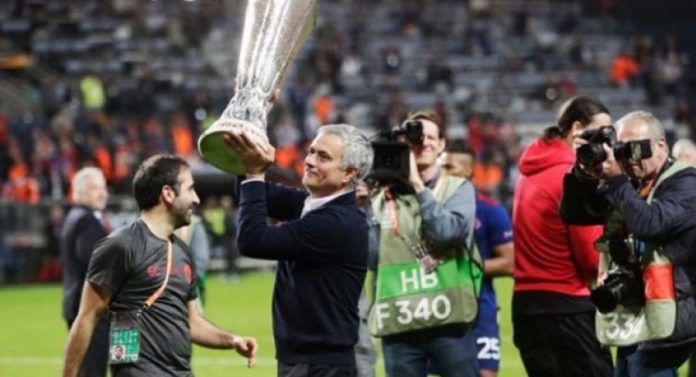 United’s victory over Ajax in Stockholm meant Mourinho finished his first season at Old Trafford with three trophies and a place in next season’s Champions League. It also handed the club the one piece of silverware missing from their collection.

Mourinho has won league titles in four countries and the Champions League twice. But after lifting the Europa League — a competition he has said in the past he did not want to win — he branded the achievement the most important of his 17-year managerial career.

“To me it is the most important trophy of my career because it is the last that is how I look at things,” he told a news conference at the Friends Arena.

“Of course, Champions League is bigger than Europa League but that is the last trophy and that is when the feelings are under the skin and obviously it is a fantastic feeling for the team.

“It means everything. It means the third trophy and going back to the Champions League and winning a European trophy and playing Super League in Macedonia in August, and means for the club the last piece of the puzzle.

“But three trophies in the season, Champions League, Europa League. I’m really happy with the players in probably my most difficult season as a manager.”

United’s victory came against a backdrop of grief and sadness following the terrorist attack that killed 22 people at the Manchester Arena on Monday night.

But Mourinho was hopeful bringing the Europa League back to the city could, in some small way, make Manchester a happier place after a devastating 48 hours.

He added: “You know, it is really hard that is why we didn’t want to have the press conference on Tuesday because we had to prepare ourselves to do our job and to try to organise events that are much more important than our job but the world goes on and does not stop and we have to do our work.

“I agree with UEFA’s decision to play the match but if we have questions like your questions that make us return to the tragedy it obviously takes happiness from our achievement.

“If we could we would change people’s life for this cup — we would not think twice. Does this cup make the city of Manchester a bit happier? Maybe.

“But we came to do our job and we can’t avoid the happiness because when you win you go away happy and proud. The boys were fantastic. They put on a block and stayed way from everything and concentrated on a football match, which we did very well.”

Mourinho also paid tribute to Zlatan Ibrahimovic, who was denied a reunion with his former club in his home country by the knee injury that ended his season.

The striker, though, did play his part. Mourinho said: “It is so unfair what happened to him. Sometimes football and life is unfair.

“This night would be an amazing night if he was on the pitch, in his home town where his statue will be.

“I am really sorry he was not able to play this final but he played outside with the other guys behind the bench.

“He also told the ball boys to take it easy in the second half so I am glad he finally gets a European trophy in his amazing career.”

And Mourinho said that the team preferred to qualify for Europe’s top competition this way rather than finishing second, third or fourth in the Premier League,

“It’s the end of a very difficult season, but I think a very, very good season,” Mourinho told BT Sport following the match. “We prefer it this way than finish fourth, than finish third, than finish second. We prefer it this way. We got the objective of the Champions League, but winning a title, an important title, a title that closes the lot. The club is now a club with every title in world football.

“We are very happy because we fought hard for this. Since the beginning we had this in our minds. We always thought that we could win the Europa League and we are obviously very happy, especially because the way we played the final.”

Mourinho said that he felt his side were superior to Peter Bosz’s Eredivisie squad and that their quality showed throughout the match, while also crediting Ajax for their performance.

“A very intelligent team, we knew exactly how to win and we did it quite in a comfortable way against a good team. But we were much stronger than them.

“If you want to press the ball all the time, you don’t play short. If you are dominant in the area, you build long. There are lots of poets in football, but poets don’t win many titles. We knew where they were better than us, we knew where we were better than them. We tried to kill their good qualities, we tried to explore their weaknesses.

“We did this very, very well since the first minute and we totally deserved the trophy.”