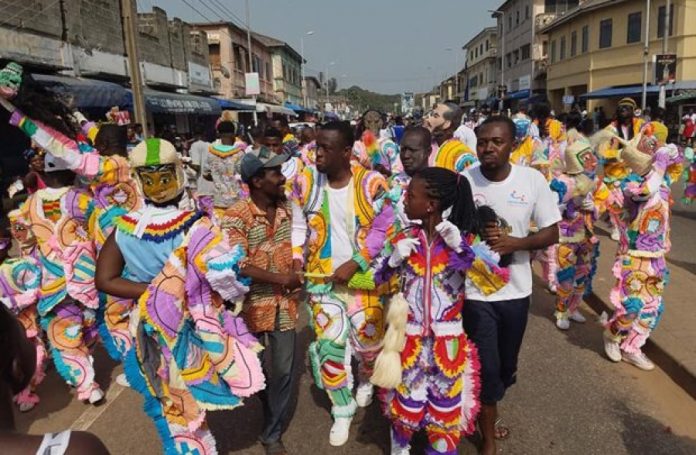 Under the midday sun throughout the streets of Takoradi, the masqueraders gambolled to the pulsating beats of the city’s greatest artistes, sending almost everyone into a frenzy of exultations.

Masquerading clubs, popularly referred to as ‘ankos’, have been part of the Sekondi-Takoradi community for some decades now. Their activities are geared towards celebrating the culture and the people of Sekondi-Takoradi and as a way of welcoming people and their relations back home for the Christmas celebrations.

Popular masquerading clubs such as Nyanta from Sekondi, Valencia, Sannato Boys, Cosmos, Mississippi from New Takoradi, Parma, Holy City, Unity, Spain, Tumus, among many others, participated in the exciting event.

This year’s event brought together Takoradi residents from other parts of the country including those in the diaspora, especially from Spain, USA and Italy, who returned home to join the colourful celebration.

The Member of Parliament (MP) for Takoradi & Deputy Minister for Aviation, Kobby Otchere Darko-Mensah, stunned his constituents during the festivities when he joined the masqueraders in the carnival.

The Takoradi MP, who has been a masquerader for many years before he became a legislator, won the admiration of Takoradi residents, particularly those in Amanful, when they saw their representative in the country’s legislative assembly again in his colourful masquerading costume.

Residents in the area, mostly the youth, expressed their excitement on seeing their idol MP, popularly called Kobby, clad in a masquerading attire and exhibiting his dancing skills on the streets of Takoradi.

They could not help but carry the MP shoulder high as some were seen commending and congratulating him for retaining his seat in the last general elections and wished him well.

Some of the residents remarked that Christmas celebration in Sekondi-Takoradi is never complete without the display by colourful masqueraders parading the streets with brass band music and dancing.

They stressed that what Kobby did actualise what is meant by grassroots participation. They, therefore, promised their continuous support for the MP.

Thousands of spectators thronged the venue to catch a glimpse of the masqueraders and have a feel of the popular street carnival which is celebrated annually during the Christmas festivities in the Sekondi-Takoradi Metropolis.

This long-standing tradition has wholly been embraced by many residents within the Twin City who eagerly look forward to it every year.