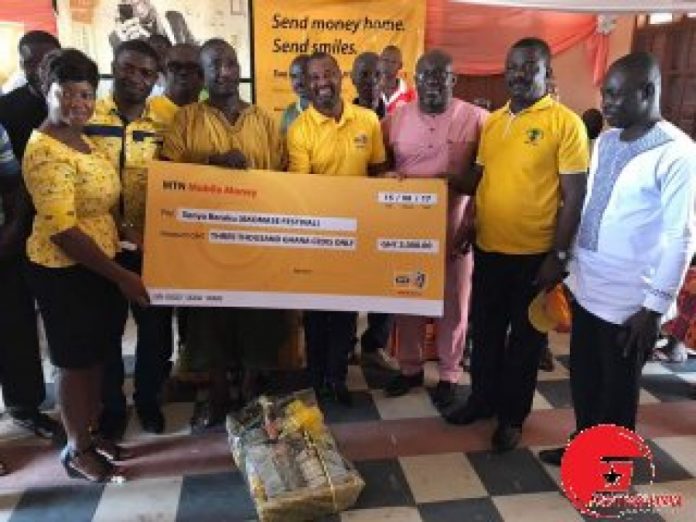 The event which is being promised to be different from previous years celebrations due to the preparations put in by the Chiefs and elders in collaboration with the Member of Parliament(MP), Nanyi George Andah, who is spearheading the planning committee with his team of hardworking men and woman.

Donating the items, the group said they were happy to be part of the celebrations which is being spearheaded by one of their own, Mr. Andah with his vast of experience in planning.

They said they know the capacities of Mr. Andah, a former Chief Marketing Executive Officer of MTN Ghana, and now Member of Parliament for Awutu Senya West, hence their involvement of the celebrations.

On his part, the MP, Hon. Nanyi George Andah, who is also Deputy Communications Minister thanked his former employers for their never-ending support anytime he knocks at their door and supporting the people in celebrating the festival in a grand style this year.

He also thanked the Chief and his elders for their votes and immense support since he won the seat as the Member of Parliament for the area. He made a donation of an undisclosed amount of cash, drinks and T-Shirts to the chiefs and the people.

A programe of activities has been lined up for this year’s celebration which started with a clean-up of the town which was participated by the people and lead by the Chief and his elders and the MP, Goerge Andah and representatives from MTN.

Also on the program is mega musical concerts, dubbed “Power2DoMore”, hiplife and Gospel performances slated for Saturday and Sunday respectively.

On Saturday evening @ 7, on the D/A Primary School Park, the ‘local artists’ will face off with their ‘foreign’ counterparts and representing the ‘local corner’ are King Bobolibo, Psalmist, Wabzee, C 4 Soldiers, Jaheziel, Jah Kauser, Passwed while from the corner of the ‘foreign’ artists are Sarkodie, Wutah, Praye, Kwabena Kwabena, Lilwin, Dada KD, Kakyire Kwame Appiah, Rudeboy Ranking, and Passco Abrantie.

House DJ and DJ Camatronzy will be behind the tune tables and it will be MCee by Kwesi Essel.

The musical concert will be preceded by a football Gala grand finally which is also themed as “Power2DoMore Football Gala” in the afternoon at the D/A Primary School park.

On Sunday evening, the Gospel music lovers are not left out as they will also be ‘treated’ with “Power2DoMore” Gospel Rock Show at the same venue @7 with the “Fefeefe” hitmaker Gifty Osei and Oma Senya Royal Choir, Heaven Praise, Becky Bonney,Minister Fred, Joe Muzik, Bra Sammy, Pastor Emma Okine and Leslie De Psalmist.

In an interview on phone with Mr. Nanyi George Andah, he said these are the times when citizens go back to their roots to re-visit their culture and traditions and also plan for the development of their towns.

“These are times in the year when we meet as a family or one people to see the way forward for the development of our towns. And during these occasions we meet old friends and family members whom we have not met for a while and also use such festivals to account for our stewardships to the people in the past year”, he said.