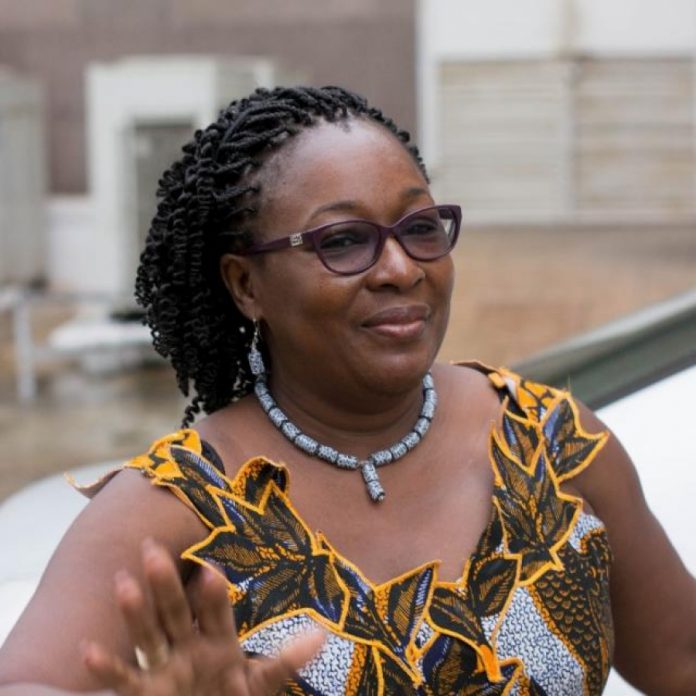 Having settled that debt, it now costs the Theatre, an average of GH₵90,000, a month to ensure continuous flow of power, and this has boost the patronage of the edifice,

Mrs. Frimpong, who acted for two years, was appointed last November to manage the theatre as Executive Director for another four years to revamp the national edifice with her managerial competence. There have been many changes as to how things are done there since she took over, and the Theatre, according to event organizers, is bouncing back to ‘take its original place’.

Event organizers lamented that they used to run at a lost when they organized programs because the facilities there were poor, and that deterred people from attending programs at Ghana’s National Theatre, but they are now overwhelmed with how rapidly the new Executive Director is changing the place.

According to the CEO, “there has been a shift in the way we do business here. In those good old days, “she recalls “government subvention took care of utility bills. That’s no more. Now all these costs have to be passed on to the event organizers”.

As first female to be appointed to take the position of Executive Director of the National Theatre, she admits there are a lot of challenges and the expectations are great, she will not be perturbed, but will deliver.

For this remaining month’s ahead, one of her priority’s is to draw up attractive business plans to woo companies and businesses to become part of the new wind blowing at the Theatre.

Among such strategies according to her, has to do with raising its visibility through extensive, high-profile branding opportunities, enhancing its image through association with a venue that represents quality, excellence and success.

One of the initiatives introduced by management over a year ago was “Friends of the Theatre” where individuals and companies who are in love with theatre were approached to come on board. Through this program, the seating has been made more comfortable, complete with artistically pleasant with new seat covers, as GTP supported with new fabrics and Chrisaach, has re-laid the entire interior.

The management she said also believes in building its brand values through association with an innovative, modern and community-oriented programs should be one of the ways to go.

In their quest to be innovative and promote theatre, management under Mrs. Frimpong, (also known as Nee Appiah) has organized outreaches to Winneba and Sekondi Takoradi, on the back of popular community events such as Aboakyre, Fetu Afahye, Bakatuei and Kundum, annual traditional festivals, to promote the Concert Party and other art forms.

Among her accomplishments, one year on is that she has been able to devise and execute a plan to diversify the ‘Theatre’s funding streams, executed a staff audit and skills audit to enable staff work efficiently.

She also completed the repair works for the central air conditioning system for the theatre, as well as the completion of the design and posting of a new website.

However, there has been an obstacle in the way of outreach, which is transportation, the theatre has only two buses, which are more than 15 years old.

She explains that; “You can’t send any of the two buses out on errands, even in Accra, and expect them to either arrive at destination or make a return trip. You will have to call a mechanic.”

Back in the day, the Theatre had flagship programmes such as Concert Party, Fun World and Kiddafest which used to be money making events.

Clearly reviving such flagships event would take more efforts as they would need to rebrand and repackage any innovation they intend to introduce to catch up with the time.

Furthermore, to despite management’s appeal to have corporate bodies coming on board, it also behooves on them to do in terms of logistics; more stage lights for the main auditorium, chairs, PA systems for the Exhibition hall which would attract event organisers to rent the place and be prepared to pay extra to keep the facility in shape.

Management as part of their strategies can collaborate with the universities to learn best practices in theatre arts and build a brand that has both local connections and international appeals.

Born to late Joseph Samuel Appiah, a founding member of the Dankwa-Busia-Dombo tradition in the Western region and a close ally to former President Kufuor and President Akufo Addo, current President of Ghana, Mrs. Frimpong also known as Nee Appiah, behind the scene has done a lot for the ruling party which she was born into.

If “blood is not thicker than water”, imagine what would have happened when the then opposition New Patriotic Party(NPP) in 2016 were prevented from using the Accra International Conference Centre for a lecture that was to be delivered by Dr. Bawumia, then running mate to the then Presidential Candidate and now President Nana Addo Dankwa Akufo-Addo but on the day of the program, had the National Theatre for a successful lecture on the economy.