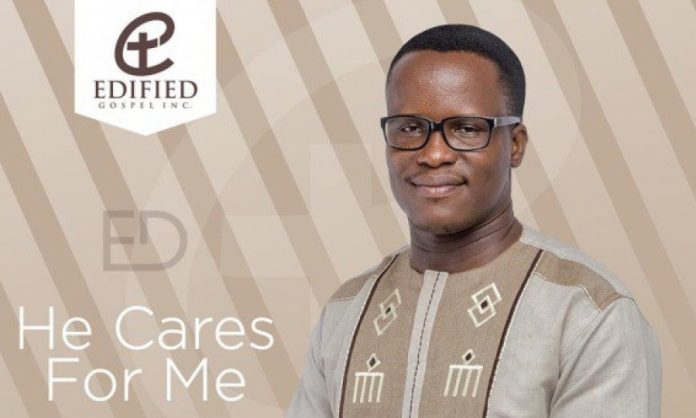 Dubbed ‘He Cares For Me’ and released with a great video, the single is rekindling the true spirit of Easter – the forgiveness of sin through the blood of Jesus Christ shed on the cross at Calvary.

The single was only released on April 1, but many followers are already emphasising how it has generated deep personal introspection and caused many to reflect on God’s grace and mercy despite our human failures.

Commenting via Ed’s Facebook page, a follower writes: “My heart was in great pain but after hearing the song, the pain is gone”.

Another writes: “though I don’t deserve it, He still cares for me…what a message!”. And this: “amazingly great song… I was soaked deep into it… God bless brother”.

Since releasing his two debut singles ‘Tis Amazing’ and ‘Father to the Fatherless’ in 2015, Ed has been quietly taking gospel music by storm. He represents an exciting phase of spirit-filled, edifying gospel music that not only inspires but also uplifts the body, soul and spirit.

God has blessed him with the special gift for leading our generation into His presence in praise and worship. His style is no different from the Brooklyn Tabernacle Choir (BTC) in New York.

Asked why his music is easily comparable to the BTC, Ed responds: “I love the Brooklyn feel…it’s soothing, yet versatile, and you’re easily led to God’s presence in no time”. ‘He Cares for Me’ brings to three the number of singles released off Ed’s hugely anticipated debut album.

The song benefits from the skills of some of Ghana’s best instrumentalists including Charlie Keyz, Emmanuel Bludo and Opoku Sanaa. The music was recorded by Josiah Morgan at the J-Morg Studios in Accra, mixed by renowned American engineer Randy Poole at the Poole Room in Franklin, Tennessee and then mastered by John Mayfield at Mayfield Mastering in Nashville, Tennessee.

Since 2012, Randy and John have jointly worked on all projects of the Brooklyn Tabernacle Choir, including hit albums Let Love Lead and Pray.

With this level of technical investment in the project, it is not surprising that Ed’s music is of such high quality. Choirs, congregations, preachers and individuals alike will find He Cares For Me as a much welcomed addition to their repertoire of edifying music.