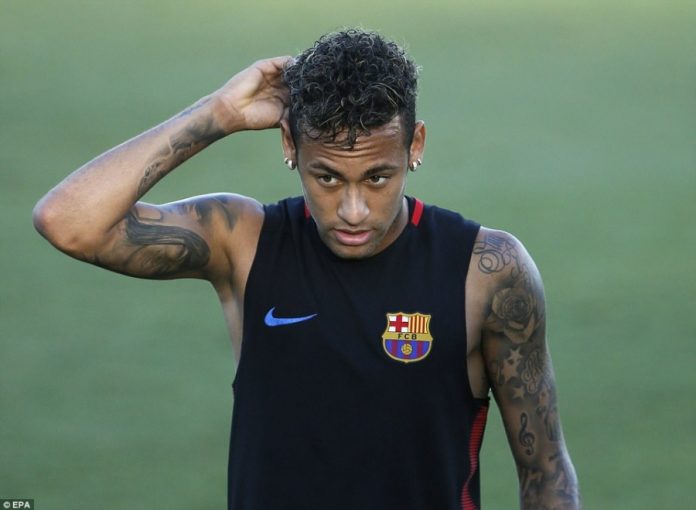 In an exclusive video obtained by Sportsmail, the Brazilian international walks off the pitch after a fight with new Barca signing, Nelson Semedo.

Neymar has been linked with a world-record move to Paris Saint Germain, and his walkout now looks to make that move even more likely.

In the video, things initially appear to be going as usual, with the Brazilian tucking away a goal during a small sided game.

However, Neymar and right back Semedo then tangle in a challenge for the ball (left), with the striker squaring up to the new arrival from Benfica (right).

Javier Mascherano quickly intervenes and Semedo runs back to the game, but Neymar is clearly still unhappy, calling and gesturing after the defender, and having to be restrained by Sergio Busquets.

The furious striker then tears off his training bib and throws it to the ground (centre) as manager Ernesto Valverde stands helpless close by, stalking off with only a rueful pat on the back from Mascherano.

Neymar then angrily fires a ball off the crossbar of a nearby training goal, and then boots another one away as he exits the field.

Accompanied by a member of the Barcelona staff, he leaves as training resumes without him, with the player going out into the car park and leaving the training area entirely.

The session took place in Miami, with Barca in the USA as part of their prestigious pre-season tour of friendlies.