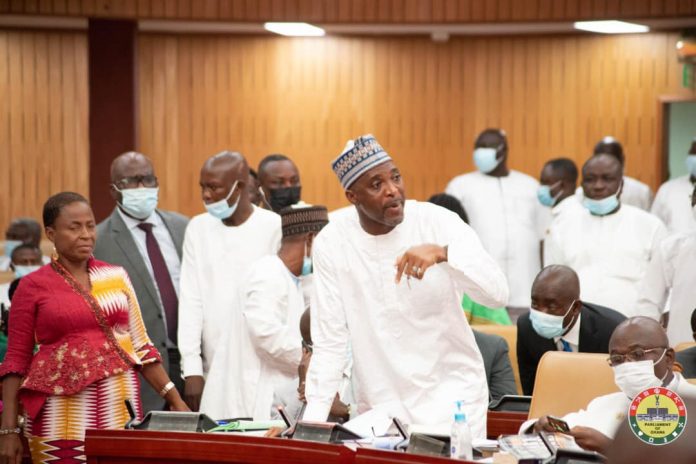 The 80 members from the Majority NPP in Parliament that started the campaign to get the Finance Minister dismissed have been warned backtracking on their demands will be suicidal.

Minority Whip, Muntaka Mohammed-Mubarak who issued this terse warning described the group as ‘the Rambo 80’ and stressed they will regret their decision if they fail to sustain their demands to have the Minister step down.

The Whip gave the warning when he seconded a motion on a Vote of Censure filed by the Minority to remove Finance Minister Ken Ofori-Atta from Office on Thursday, November 10.

He stated that Ken Ofori-Atta’s mismanagement of the economy has not only left the state on the brink of economic disaster but ordinary Ghanaians are now compelled to struggle to feed their families.

He indicated that getting the Minister out of the Finance Ministry is the responsibility of the members of Parliament who have been voted for to fight for the interest of the Ghanaian people.

He said, “I want to urge my colleagues, especially the Rambo 80 to have it at the back of their minds, ‘You have a reason for rebelling.”

“You know this is a Finance Minister who does not listen. You know the efforts that you have made severally to get him to do the right things and he refused. Those are the reasons that led you to rebel.”

“I can assure you if you backtrack you’ll regret it because you know the kind of President and his family that you have.”

“They will surely come after you. It is better for you today to help us remove him. It will give you mileage and will make people believe you.”

“Show that your move to get him out is not out of hatred but it is simply based on principle. Keep to that principle today.”

Meanwhile, the 80 MPs have reverted to their initial position when they first demanded the Minister of Finance be dismissed.

At a press conference on Thursday, Dr. Nana Ayew Afriyie who addressed the media said the MPs do not want Ofori-Atta to present the 2023 Budget statement to Parliament and should not be the one to lead the Appropriation.

He, however, insisted they will not support the Vote of Censure of the Minority because it is based on propaganda, falsehood, and premised unjustified accusations.

He said, “When people are hard-pressed and have no understanding of the logic of competence and hard work and when they lose confidence, it affects the markets and the pocket of people… it is the Finance Ministry.”

“We have nothing personal against the Minister.”

“Our position is clear that if confidence in the Finance Minister has gone down he must go,” he added.

In a related development, Speaker Alban Bagbin has deferred the Vote of Censure motion to an 8-member Ad Hoc Committee to investigate allegations against the Finance Minister and report to the House within seven days.