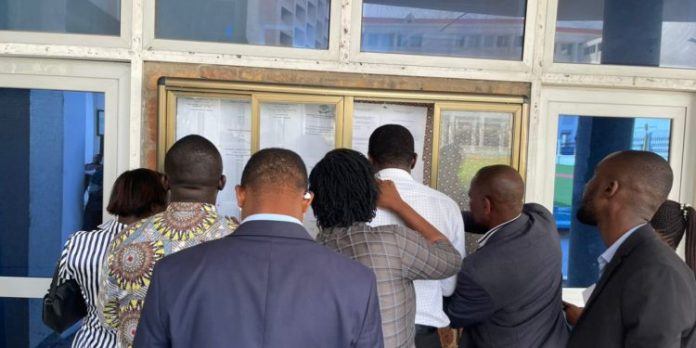 Final Results for the examinations conducted in July by the Independent Examination Committee (IEC) of the General Legal Council (GLC) to select qualified students of the Ghana School of Law (GSL) to be called to the Ghana Bar this year have been released.

The general position of Ghana’s law is that the GLC is the primary institution that regulates legal education in Ghana.

However, the IEC, an institution created under the authority of Parliament in 2018, has the exclusive mandate of conducting and managing both entrance examinations for admission into the GSL and all internal exams taken by law students.

The final results were released after midday on Thursday, November 3, 2022.

Others wept uncontrollably upon finding out that their names were not on the list of candidates certified as having passed all their final exams.

Citi News‘ analysis of the results shows that some 81 percent of the over 800 Part Two Professional Law Course students – defined as candidates who started and completed their professional law course on various campuses of the GSL – have passed.

However, 18 percent of candidates who sat for the exams failed at least one or more of the papers written in July 2022.

The percentage of successful candidates belonging to the post-call law class – defined as persons who have been called to the Bar in other common law jurisdictions such as the United Kingdom, the United States of America, Nigeria and The Gambia was, however, lower; at over 60 percent.

Around 33 percent of post-call candidates failed at least one paper, meaning they are ineligible to be considered for the Ghana Bar this year.

Put together, some 850 candidates of the Ghana School of Law are fit to be considered for the Ghana Bar on November 11, 2022, provided they have equally met other requirements, such as “Good character”.

Speaking to Citi News after the results were published on the noticeboards of the GSL, one source said, “The results this year are both historic and remarkable.”

“The number of students who sat for the exams this year is huge,” the source said.

“From the numbers passing, it is safe to state proudly that the system for training lawyers in Ghana is significantly improving in a way that ensures that we are not only training more lawyers for Ghana but are equally keeping a firm eye on high quality,” the source added.

“It is regrettable some of the candidates could not make it. Truly unfortunate. However, the good thing is that they can try their luck next time,” the source added.

To pass a paper, a candidate must obtain at least 50 percent of the 100 available marks per paper.

It is important to note that merely passing the final exams does not give a candidate an automatic right to be called to the Bar. Beyond passing his exams, a successful candidate is required to satisfy the General Legal Council that he is a person of “Good Character”. Thus, for example, a candidate may have passed all his or her final exams but may still not be called to the Bar if it is established that he is a person with a criminal record.

“I am so happy that the long wait is over,” one excited candidate, Jessica, told Citi News.

“I am so relieved that this chapter is over”.

“It has been six long years of sleepless nights, and finally, I am on my way to be called to the Ghana Bar,” remarked Rebecca, another candidate.

“I am rushing to the boutiques from here to buy my shoes and suits for the Call ceremony”.

“You have no idea what it feels like to pass a law school exam,” said Kofi, another successful exam. “It is as if the whole world has been lifted off my shoulders,” he added.

“Oh! My name is not on the list of successful candidates, meaning I have failed one or more of my papers,” said one unsuccessful candidate with tears streaming down her eyes. “It hurts so much, but I am trusting God for a better outcome next year,” the candidate added. Another stated, “we did our best but our best was not enough. We do better next time”.

Of the Part Two candidates who sat the exams, 11 percent have been referred, meaning they failed at least one or two papers. Candidates in this category usually rewrite their papers in the first quarter of the new year. The successful ones will then be called to the Mini-Bar in either May or June. For part 2 only, only four candidates, representing 0.5 percent, failed three or more papers, meaning they are to repeat the entire Part Two course.

One hundred one candidates took the exams for the post-call, with 61 passing all papers. Thirty-four post-call candidates were referred, meaning they are eligible to rewrite the papers they failed in the first part of 2023. Close to six percent failed at least three or more of their papers, meaning they will have to re-take the entire post-call course.

In September this year, the GLC announced it would “Call” newly qualified lawyers to the Ghana Bar on Friday, 11 November 2022. On Tuesday, 8 November 2022, the GLC is expected to hold a major dinner in honour of all the successful candidates.

The November date broke tradition, as the GLC typically calls freshly qualified lawyers to the Bar every year in early October.

Please see below for photographs of the complete list of the passed students set to be called to the Bar on 11 November 2022.