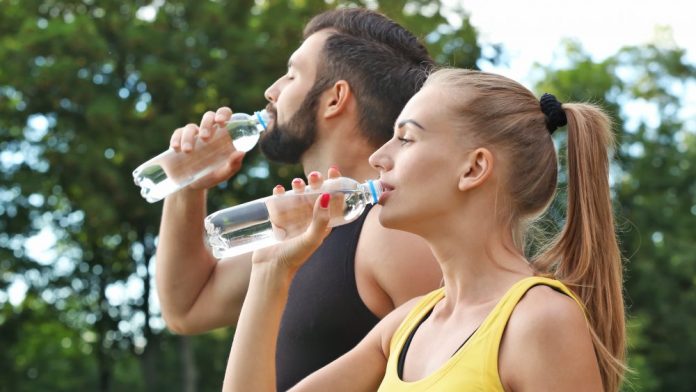 It’s no surprise that drinking enough water is important. After all, the human body is about 60 percent water. According to the Journal of Biological Chemistry, the lungs are made up of about 84 percent water, kidneys are 79 percent, and the heart and brain are 73 percent. Even “bone dry” bones are 32 percent water.

Growing up, most of us were told to aim for eight 8-ounce glasses of water every day but, as Healthline pointed out, the origin of this guideline is unclear and it has not actually been supported by scientific research. The Institute of Medicine (IOM) recommends women aim for 91 ounces (2.7 liters) of fluids each day, while men should get 125 ounces (3.7 liters) daily. The IOM noted, however, that not all of your fluid intake has to come from plain water, but “all beverages and food.” And everyone’s exact hydration requirements vary. Factors such as exercising, temperature, illness, and pregnancy can all impact fluid needs.

While every person’s needs are slightly different, the dangers of dehydration are universal. We all know the obvious symptoms of dehydration, such as thirst, a dry mouth, and dark-colored urine. But when it comes to chronic dehydration, there are many other subtle ways your body can communicate that it needs more fluids.

If you’re not drinking enough water, you may experience weight gain

If you’re not sure why you’ve put on a few extra pounds, it could be because you’re not drinking enough water. As registered dietitian Megan Wong of AlgaeCal told Health Digest, “Drinking water increases feelings of satiety, meaning a feeling of fullness. This could be why researchers have found a link between obesity and inadequate hydration.”

One study, for example, led by Dr. Tammy Chang and published in the Annals of Family Medicine in 2016, examined the health habits of over 18,000 adults and found that those who weren’t well hydrated were more likely to have an elevated body mass index (BMI).

One reason for the connection between hydration and BMI may be the fact that people often misinterpret thirst as hunger, thus filling up on calories when what they really need is fluids. According to the Polycystic Kidney Disease Foundation, 37 percent of individuals mistake thirst for hunger. Registered dietitian Trista Best explained that this mix-up in signals can cause “late-night binge eating, overeating at meal times, and chronic snacking.” The next time you think you’re hungry, Wong suggested drinking a glass of water before immediately reaching for a snack.

If you’re having heart trouble, you may not be drinking enough water

Not drinking enough water can have major consequences for your cardiovascular health. According to The Heart Foundation, “When you are dehydrated your blood volume, or the amount of blood circulating through your body, decreases. To compensate, your heart beats faster, increasing your heart rate and your blood pressure.” Your blood also retains more sodium when you’re dehydrated, thus thickening your blood and making it more difficult to circulate through your body.

ScienceDaily noted that dehydration increased individuals’ risk for cardiac disease and arteriosclerosis (the hardening of artery walls), even among young, otherwise healthy individuals. In the article, Stavros Kavouras, associate professor and coordinator of the Exercise Science Program at the University of Arkansas, argued that when it comes to heart health, dehydration is as bad for the body as smoking a cigarette.

Alarmingly, even very mild dehydration can be bad for your heart. Kavouras explained, “The degree of dehydration when these changes occur is at less than 2 percent dehydration, which is around the threshold when people start feeling thirsty.” Heart disease is the leading cause of death in the United States, and while there are many contributing factors, dehydration is an easily preventable one.

If your blood pressure is out of whack, you may not be drinking enough water

According to Healthline, dehydration can both raise and lower blood pressure, both of which can be dangerous if left unchecked. Without enough fluids in your system, blood volume decreases, which lowers blood pressure. On the other hand, dehydration-induced low blood volume and an increased concentration of salt in the bloodstream trigger the release of the hormone vasopressin. This hormone causes narrowing and tightening of blood vessels that, in turn, lead to an increase in blood pressure.

The Mayo Clinic noted that a blood pressure reading below 90/60 mm Hg is generally considered low. Low blood pressure (hypotension) can cause many symptoms, including dizziness and fainting, fatigue, blurred vision, and nausea. If it drops too low, your organs won’t receive the oxygen and other nutrients they need, resulting in life-threatening hypovolemic shock.

High blood pressure (hypertension), on the other hand, is a major risk factor for stroke and heart disease. It’s also a common problem in the United States, affecting approximately 103 million Americans (almost half of U.S. adults), according to the American Heart Association.