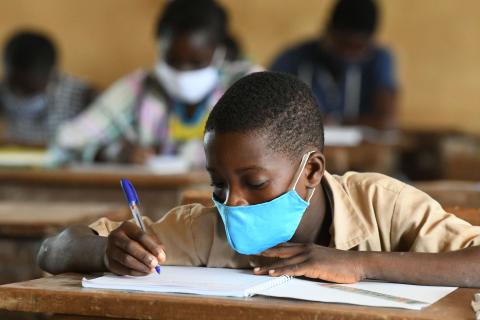 It is now over two weeks since schools across Ghana were reopened for business.

Many stakeholders in the educational sector had reasons to publicly complain about the lack of adequate planning aimed at ensuring the protection of students on school campuses in this era of a vicious second wave of COVID-19 with its rising new variant.

The safety of students must continue to occupy our attention because of the current spike in the numbers, and especially the new evidence from the Komfo Anokye Teaching Hospital (KATH) indicating the virus, perhaps the new variant, infects children, contrary to previous assumptions that their immune systems could withstand the deadly virus.

In an apparent response to complaints about lack of and/or inadequate PPEs in some schools across the country, the Director General of the Ghana Education Service, Prof Opoku-Amankwa addressed the media on Thursday, January 28, and gave a breakdown of the PPEs that he claims Government has distributed to schools nationwide as follows:

Prof Opoku-Amankwa further stated that a team of monitors including personnel from Ghana Education Service (GES) and the Ghana Health Service (GHS) continually monitor, evaluate and report on progress from the schools in terms of the prevention of the spread of the virus.

The Director General added that his outfit has trained 52,000 teachers to help curb the spread of COVID-19 in schools across the country.

I have some questions to ask regarding the team of monitors. For example, is it one national team or a team per region or district?

Equally, what is the regional breakdown of the teachers trained to help curb the spread of the virus in our schools?

It is instructive to note that the Director General could not deny the allegation that Government through his outfit failed to ensure that the PPEs got to the schools before they were reopened. Why Government would have closed down schools as part of measures to control the spread of a virus and to protect students, will reopen same schools without first ensuring that the full compliment of PPEs were in all schools ahead of students reporting still baffles many.

It is even more worrying, given that more people, including children, from a few weeks to fourteen years old, are getting infected.

In fact on the 29th of January, only a day after Prof Opoku-Amankwa gave his breakdown of PPEs to schools across the country, reports from media outlets and a statement made on the floor of Parliament by Hon. Laadi Ayii Ayamba, Member of Parliament for Pusiga, indicated that several schools either had not received PPEs at all or didn’t receive the full compliments of PPEs as expected: she notes in some instances, nose masks only; in other instances, nose masks and sanitisers but no liquid soaps or veronica buckets; and in some cases, veronica buckets, liquid soaps without nose masks etc.

Given the above, and to ensure that there is accountability, as well as to allow stakeholders to verify the claim that the PPEs have been moved from the centre, I would have wished the Director General gave detailed information beyond just the quantities of various supplies constituting the PPEs. For example:

Without malice, I believe answers to the above questions will help expose and deal with shortcomings and perhaps, dereliction of duty on the part of those responsible for ensuring that adequate PPEs were/are in our schools. This would will help us as a nation address any obstacles, human or otherwise, in the supply chain, to ensure that PPEs are where they are needed and are replenished timely.

By the way, I was disappointed that no serious attention was paid to the issue of inadequate furniture and overcrowding in some schools at the press briefing by the Director General. These also have implications for the observation of social/physical distancing.

If the shift system is adopted to decongest schools, would the same teachers teach both shifts or new teachers would be recruited?

If the same teachers would teach shifts, what plans have been made to compensate them for the additional work?

Over to you, Prof Opoku-Amankwa. I present these issues to you as a representative of the people. I hope you find time to address them.