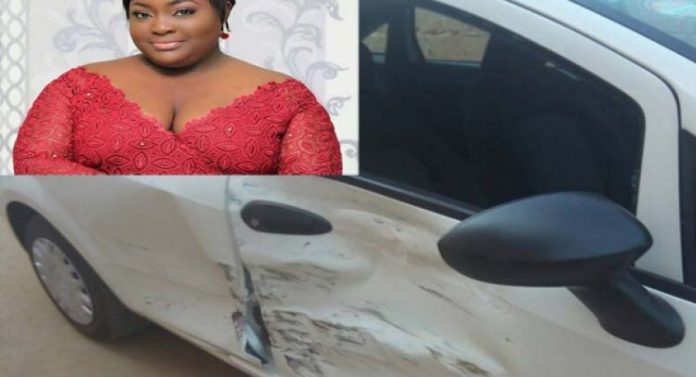 The passenger side of Roselyn’s Fiat Linea saloon car was crashed into by a commercial van (trotro), causing it to spin several times before it finally stopped.

The driver of the commercial immediately took to his heels and left his van, perhaps because of his guilty conscience.

Officers of the Ghana Police Service (GPS) are currently investigating the accident. They took measurements at the accident scene, and have reportedly faulted the van driver who is currently on the run.

Roselyn yesterday confirmed accident, saying, “I am OK. I am just in shock.I thank God for my life. I want to commend the police for their swift action, especially Sergeant Clement Gamor, who is handling the case,” she said.

The talented actress was last seen at the press preview of her upcoming movie, ‘Adam The Eve’, where she had made a call on the management of television stations in Ghana to commence producing their own local series.

She also expressed interest in the ongoing massive signing at new Zylofon Media, as she disclosed that she would be glad if she gets signed too.