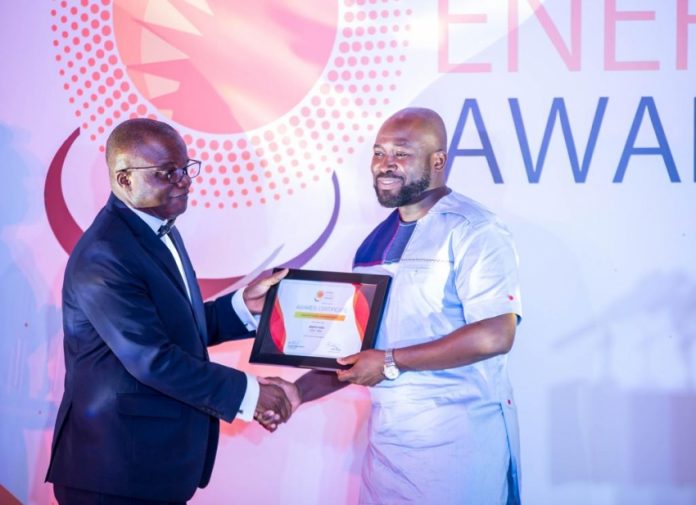 He was conferred with the “Osagyefo Young Leadership Award.”

The citation accompanying the award said “This august honour is in recognition of your outstanding posturing as one of Africa’s most innovative and developmental thought leaders in the Petroleum Trading and Distribution sector; having contributed immensely to the economic growth of Africa.”

It said “you have been instrumental in the development of and implementation of major policies in the Ghanaian energy sector, such as, the deregulation of the downstream petroleum sector, low sulphur fuel and the conceptual development and rationalization of the Energy Sector Levies Act ant its consequent debt management interventions.”

“Through your unparralled leadership skill, you have laid a very strong foundation for the future prosperity of the Ghana Chamber of Bulk Oil Distributors (CBOD) and a key factor in the development of the economies of Africa at large,” the citation stated.

The citation went on to the state that “your appointment as the first CEO of the Chamber of Bulk Distributors in 2013 served as a significant boost for the fledging petroleum front. Under your capable leadership, the CBOD has become one of the most effective lobbying and advocacy groups in Ghana and demonstrated a remarkable capacity to push through the group’s collective agenda on many important issues.”

The Director of Power Generation and Transmission at the Ministry of Energy, Mr Solomon Adjetey presented the award to Mr Hosi at a colourful ceremony in Accra recently.

Speaking to the graphic online afterwards, Mr Hosi said the award was quite humbling.

“I have always believed in Nelson Mandela’s charge on us to lead from behind and as such my focus has been more focused on service to my country,” he said.

“It is however humbling to realise that the effort you make in the quiet is recognized and brought to the fore.

“My humble achievements have not been realized on my own accord if I am seen today it is because I stand on the shoulders of many great people – namely my staff, my family, friends and public officials I work with across all governments,” Mr Hosi said and promised to continue to contribute his quota to the growth of Ghana’s oil and gas sector.

Mr Hosi, is credited with developing the Chamber into a major representative, advocacy, and lobby and industry strategy and policy organisation in the Ghanaian and West African downstream petroleum industry.

His advocacy and policy analysis served as the catalyst for key policy decisions including petroleum price deregulation that saved the Ghanaian economy $500 million every year in unbudgeted subsidies; the low sulphur policy that introduced cleaner fuels by adopting low sulphur petroleum standards (from 3000ppm to 50ppm); and the development of the conceptual framework and design for the adoption of the Energy Sector Levies Act.

The government of Ghana recently ring-fenced proceeds from the levies as collateral for Ghana’s first energy bonds to address the energy sector’s debt of about $2.5 billion.

These contributions to the industry provided a remarkable turnaround in Ghana’s economic, financial and energy prospects.

The interventions have further turned around the dwindling commercial fortunes of a hitherto heavily indebted downstream sector.

Mr Hosi’s outright advocacy, backed with solution oriented policy analysis has made him a constant reference for policy proposals by both the public and private sectors.

Together with his fine lobbying skills, he has become an industry leader from behind.

Mr Hosi has effectively managed competing interests of 30 oil companies in the Chamber to collectively work towards driving sustainable policies within the industry.

He is a key resource person for major regional downstream platforms like OTL Africa, Argus Media Road Conference, Africa Oil and Gas Summit among others.

He holds an MBA in Finance and an MA in Economic Policy Management.