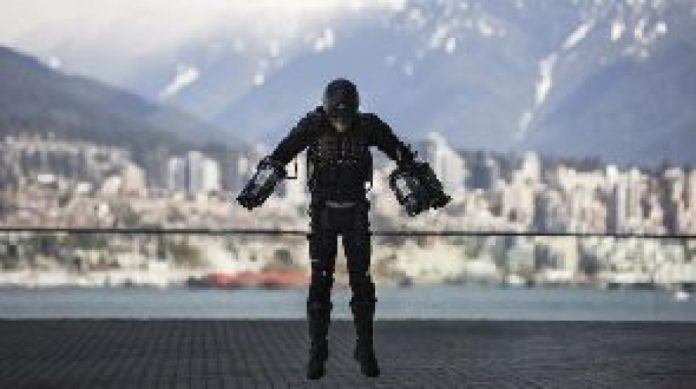 Since he posted the video of his maiden flight in the UK, Mr Browning has had huge interest in his flying suit.

But he insists the project remains “a bit of fun” and is unlikely to become a mainstream method of transportation.

He was inspired by his father, an aeronautical engineer and inventor, who killed himself when Mr Browning was a teenager.

He told the BBC that he always had a passion for making things and loved a challenge.

“I did this entirely for the same reason that you might look at a mountain and decide to climb it – for the journey and the challenge.”

He said he was also fascinated by the idea of human flight.

“My approach to flight was why not augment the human mind and body, because they are amazing machines, so I just bolted on what was missing – thrust.”

He has a helmet with a sophisticated heads-up display that keeps him informed about fuel use.

The Daedalus suit – named after the father of Icarus by Mr Browning’s eight-year-old son – takes off vertically. Mr Browning uses his arms to control the direction and speed of the flight.

Mr Browning said it is easily capable of flying at 200mph (321km/h) and an altitude of a few thousand feet.

But, for safety reasons, he keeps the altitude and speed low.

He insisted it is “safer than a motorbike”.

The suit can currently fly uninterrupted for around 10 minutes.

The start-up he founded, Gravity, is working on new technology for the device which Mr Browning said will make the current prototype look “like child’s play”.

Since video of his maiden flight went on YouTube, he has had thousands of views and interest from investors and the UK military.

But he does not think that the system is about to go mainstream anytime soon.

“I think of it as a bit like a jet ski, a bit of fun or a indulgent toy, but I do have a hunch that stuff will come along to make it more practical.”

It remains a fascinating project for those who see it in action.

“There is something strange in seeing the human form rise up and drift around and that leaves a deep impression on people,” he said.

The Civil Aviation Authority has yet to take any decisions of the level of regulation required for jetpacks.

And in Europe, the European Aviation Safety Agency (EASA), which has responsibility for approving all new aircraft designs, including experimental concepts, has not yet formed an opinion on human propulsion technology.

“Going forward it may be necessary to create a new category of regulation for this technology as it clearly does not fit in neatly with aircraft regulation,” a CAA spokesman told the BBC.

“Ultimately, I think it unlikely that such technology would be completely deregulated.

“This is potentially powered flight after all, unlike activities such as hang-gliding and paragliding which are deregulated. High speed human propulsion could easily conflict with low flying aircraft and so the ‘pilot’ would almost certainly need some kind of training and a licence.”