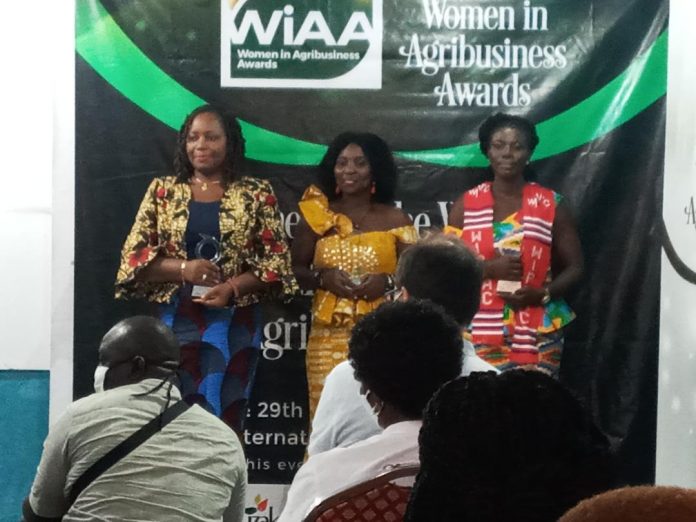 The awards is aimed at celebrating and highlighting the achievements of exceptional women in the agribusiness fraternity who are blazing the trail for others, as well as supporting women through mentorship and market linkages.

Guzakuza Project Lead, Madam Fortune Kyei, said 2015, Guzakuza had developed an ecosystem for women in Agribusiness, inspiring them to be profitable, achieve sustainable growth and build resilient agribusiness in Africa.

She said the maiden edition of the awards received 378 entries for five categories. The entries were shortlisted by a team of independent assessors who submitted a list of nominees to a panel of judges from five African countries.

“The panel took into account any supporting evidence and assessed each nominees business to determine a shortlist of five finalists in each category. The highest scoring finalist by the panel of judges in each category was named the winner.”

Mr Detler Alex Jahn, Head of Programme, GIZ said for more than 40 years the GIZ had been working with public and private institutions in various sectors that focus on job creation, especially for women and the youth.

He said the GIZ had developed strong relations with Guzakuza to bring women in agribusiness together in Ghana and across Africa.

The initiative, he said, drew attention from stakeholders from all over the world and provided visibility to support women excelling against all odds in the prevailing unavailable access to resources.

Mr Jahn noted that apart for structural disadvantages like access to finance, lands, market, and business intervention skills, women often had lower confidence levels in their abilities as entrepreneurs than their male counterparts, and their networks tended to be smaller than men, and were less likely to seek the support of or use the social networks around them.

But confidence and efforts, he said, were key requisites for success especially in business and must not be underestimated.

He congratulated the awards winners for their innovation and resilience, and for being role models to others.

Madam Nkrumah, Chief Executive Officer Achiepee Farms, who is into poultry farming and the production of organic fertilizers with chicken droppings, said her principal challenges were access to funds to improve her business, as well as marketing linkages.

She noted that inorganic fertilizers were destroying lands and the disposal of chicken droppings polluted the water bodies “so if we were able to mechanize it these problems would be solved.”

“If we want to grow healthy by eating more organic foods, we must ensure to bring a lot of organic fertilizers into the system as it will help the soil, binds its structure and prolongs the self-life of the produce and leave no residue in the produce.”

Madam Nkrumah said that winning the award had given her the motivation to do even more, and not to relent in her efforts.

“I want to extend my business beyond my district, and so I am hoping to get machines to improve my business and this award is encouraging me not to give up because there is someone out there appreciating my efforts”.

She encouraged women not to invest more time and energy into fashion, but focus and work hard to be successful.