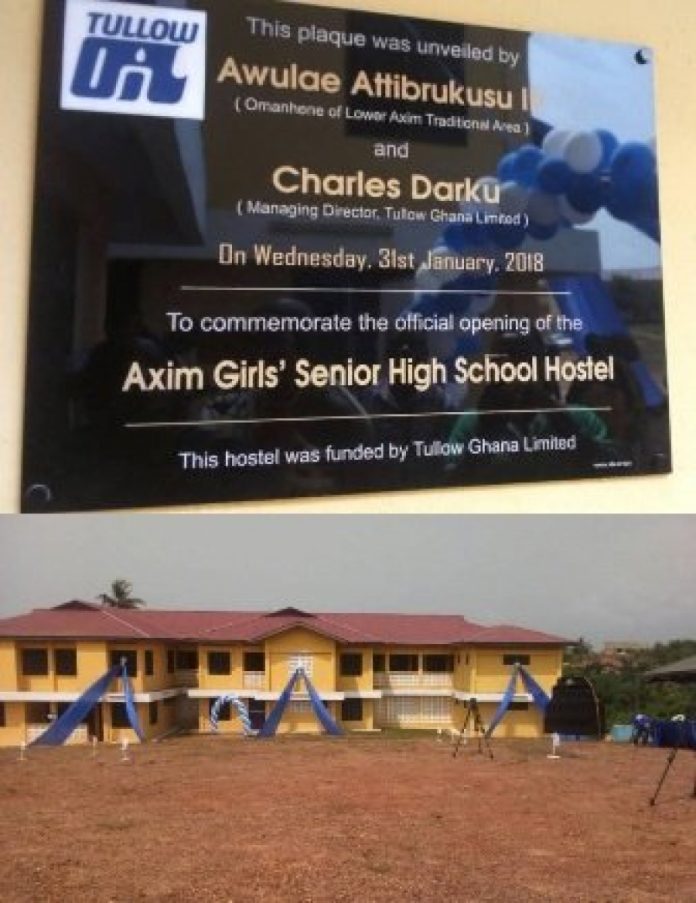 She said quality female education must therefore be a concern for all, especially the government and other stakeholders in education to ensure a brighter future for girls.

Ms Appiah was speaking during the handing over ceremony of a 500-bed capacity dormitory built by Tullow Ghana Limited for the Axim Girl’s Senior High School to argument infrastructure needs of the school.

The School mooted by the Omanhene of Axim, Awulae Attibrukusu III in 2007 started as a community funded senior high with only 23 students.

Currently, the school has a population of 400 and was integrated into government assisted senior high schools during the 2011/2012 academic year.

The Headmistress said despite the young age of the school, it continued to be the star in the Nzemaland as the only girls’ education centre around, “It is my vision to see the school soar higher and higher and even become over-subscribed in the coming years”.

She on the other hand, mentioned the lack of teachers’ accommodation, dining hall, administrative block and assembly hall as some of the infrastructural deficits in the school.

Mr Charles Darku, Managing Director, Tullow Ghana Limited said as a purely engineering company, Tullow Ghana was committed to developing the capacity of local communities in their operational areas especially in the sciences as a lasting legacy.

So far, according to him, the company had instituted the ‘STEM project’ and renovated some science laboratories of selected second cycle institutions as a measure to improve science education in the country.

“We at Tullow consider education as the bedrock of human society and its advancement and will therefore continue to invest in quality education delivery to help us realise our vision of transforming societies through our operations”, he added.

Mr Darku was enthused by the leadership skills of the traditional leader of the area adding, “Local leaders that take initiatives and make choices that are best in the interest of the people must indeed be appreciated”.

Awulae Attibrukusu, the initiator of the project lauded Tullow Ghana for their commitment at improving on livelihoods in their operational areas and called on the District Assembly to follow the positive examples of Tullow and support the school in terms of infrastructure.

The school cadet and choreography team put up a splendid performance to express their appreciation to the donors.