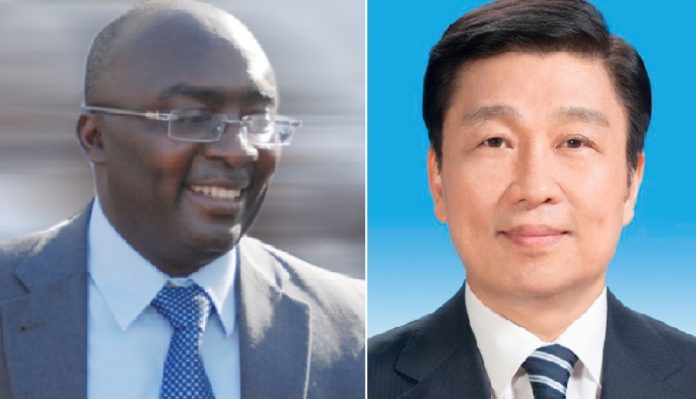 Dr. Bawumia will meet Chinese leaders and those of the Communist Party of China (CPC) to exchange views on bilateral relations and discuss regional and international issues of common interest such as in the areas of capacity building, investment, financing and infrastructural development.

The Chinese Ambassador to Ghana, Madam Sun Baohong, who disclosed this in an interview with the Ghana News Agency (GNA) in Accra last Saturday, said the visit would be the first by a high-level government official to China since the New Patriotic Party (NPP) took office in January this year.

She said Dr. Bawumia would attend the China-Ghana Investment, Production and Capacity Co-operation Forum and meet a number of renowned Chinese financial institutions and entrepreneurs.

She added that the Chinese embassy would work closely with Ghana to ensure that the visit ended successfully with positive outcomes.

Ms. Sun said China had become Ghana’s largest trading partner as trade between the two countries surged from less than $100 million in 2000 to $5.97 billion last year.

In addition, she said, the volume of trade between the two countries in the first quarter of this year reached nearly $1.4 billion.

“Both China and Ghana attach great importance to the visit, since it will enhance bilateral relations and expand cooperation between the two countries in various fields and push the China-Ghana relations to a new level,” Ms Sun said.

She added that the major social and economic development plans of the government were consistent with the Belt and Road Initiative of China as well as the relevant content of “China-Africa 10 Cooperation Plans” under the framework of the Forum on China-Africa Cooperation.

Ms Sun said the Belt and Road Initiative by the Chinese government was in line with the ideas of the China-Ghana and China-Africa cooperation.

She said the agreement between China and Ghana on Mutual Visa Exemption for holders of diplomatic and service passports was formally implemented on March 28, this year to enhance trade and cooperation between the two nations.

She said Chinese enterprises were exploring more investments in energy, manufacturing and agriculture, in addition to the signing of the Joint Hospital Cooperation Agreement on March 24 by the two countries.

“We will strengthen policy connectivity with the Ghanaian side, make full use of each other’s advantages, promote cooperation in infrastructure, capacity building, manufacturing and agriculture in a solid and steady manner and make greater contribution to the economic restructuring and industrialisation of Ghana,” Ms Sun said.

The Chinese ambassador said China had made significant contributions to the economic and social development of Ghana by investing and financing the construction of the Bui Dam, Sunon Asogli Power Plant, natural gas infrastructure, telecommunications backbone networks, the distance education and water supply projects.

She noted that the grant project by the Chinese Government to build 1000 boreholes in Ghana was 80 per cent complete.

Ms Sun noted that the people-to-people exchanges between the two countries were flourishing adding; “Learning Chinese is becoming more and more popular among Ghanaians and two Confucius Institutes have been set up in Ghana with 4,000 people registered.”

There are currently more than 5,000 Ghanaian students studying in China, many of whom are funded by the Chinese Government Scholarship programme.

China-Ghana relations have enjoyed great prospects since the government took office in January, she said, and gave the assurance that the relations would be enhanced with the visit by Ghana’s Vice-President.

She said the government had put forward a series of major development plans such as the “One-District, One-Factory” and “Planting for Food and Jobs” thus providing new opportunities for the China-Ghana cooperation.

The Chinese ambassador said the embassy would soon donate agricultural machinery to the Savannah Accelerated Development Authority (SADA) and that the new container terminal project at the Tema Port, being constructed by the China Harbour Engineering Company, was progressing steadily.