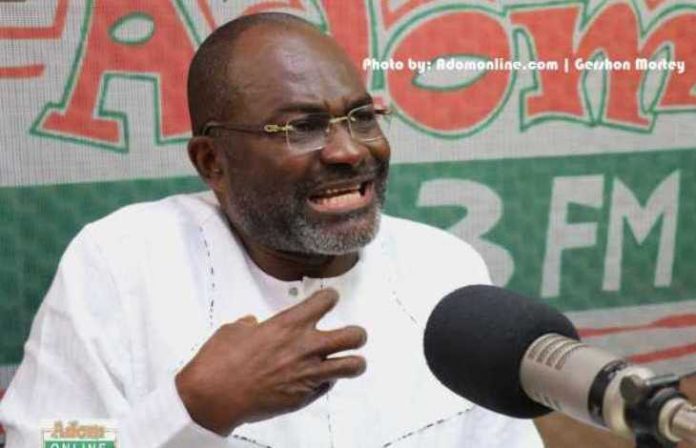 Aspiring presidential candidate of the ruling New Patriotic Party (NPP), Kennedy Agyapong has urged his colleagues in the majority to support the government to pass its 2023 budget.

He stated that demands for the dismissal of Ken Ofori-Atta and questions of his ability to lead the Finance Ministry could be confronted after the budget presentation.

According to him, these are very challenging global times with escalating energy and food prices pushing millions in Africa and elsewhere into extreme poverty and threatening the internal security of many nations.

“Ghanaians need their elected representatives to show up for work and help them survive the worsening global economic turmoil.”

“It is not the time to play political games or feed egos,” he said.

The Assin Central member issued a statement on Tuesday, November 22 amidst simmering tension in Parliament among members of the Majority group who are demanding the dismissal of the Finance Minister.

These MPs have issued an ultimatum they will boycott the 2023 budget presentation and debate and the Appropriation if Ken Ofori-Atta leads the process.

Mr. Ken Agyapong argued the ultimatum is no more than an attempt to blackmail or unduly force the hands of the President and undermine his authority and agenda for Ghanaians.

“That cannot be right. The President is our leader and deserves the full benefit of the doubt if any.”

“Given the crippling economic crisis facing the people of Ghana and their businesses, it is the highest level of insensitivity towards the plight of our nation and her people for any elected representative or group of elected representatives to use their public offices to attempt to hold hostage efforts to address the economic problems,” he stated.

He argued that MPs have been elected to serve the best interest of the people of their individual and collective constituencies.

He stated if there is ever any time that Ghanaians expect their representatives to do their duty to Ghana unconditionally, it is now adding, “We must not and cannot sacrifice that responsibility to our people on the side issue of who presents the 2023 Budget to Parliament.”

He urged his colleagues to show leadership and demonstrate solidarity with the struggling masses of the people by turning out in their numbers to support the President’s proposed plan to put Ghana back on the path of economic recovery and triumph.

Every NPP MP, he said, has to preserve and ensure the agenda of the Akufo-Addo government succeeds otherwise; the people of Ghana would have no reason to return the NPP to power in 2024.