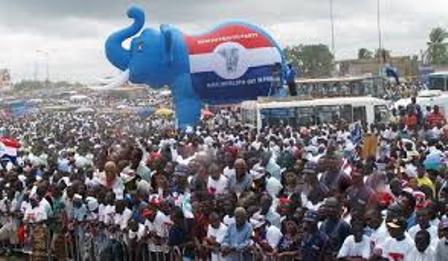 Pollster Ben Ephson has advised the governing New Patriotic Party (NPP) to fast-track its selection processes and bring the timetable a year earlier so that by 2023 the flagbearer for the 2024 election would be known.

This, he said, has become imperative because using words and warnings will do little to dissuade people from making claims of who they want and believe should lead the party for the next election.

He stated that from 2022 to 2023 Nana Addo Dankwa Akufo-Addo will be a limp up President in terms of his importance in the NPP because he effectively would be exiting from the presidency.

Speaking on TV3’s analytical programme, The Key Points, on Saturday Mr. Ephson noted that between 2020 and 2023 a lot of things will change in the NPP.

He noted that the current power-play and jostling in the ruling party is history repeating itself and not necessarily a new phenomenon.

According to him, a similar scenario played out in 2005 immediately former President J.A. Kufuor won a second term and was compelled to respond to an open letter from the late Victor Owusu.

President Kufuor, he said, indicated the importance of managing anxieties in the party and did warn the jostling could undermine cohesion and unity and demanded the NPP to rather concentrate on the success of his government.

The ruling party, he said, from next year will be electing people at the polling station, the constituency and regional levels, and culminating at the national level.

He argued that for those interested in leading the NPP in 2024, this will be the time to throw out their intentions and test the grounds.

He said, “If you are interested you would need to throw it out there so that people will approach you to sponsor them to be in a position to be able to influence the potential delegates.”

“The NPP is now in a position where it is like a person climbing a tree and halfway through sees and snake in the branches and below is a lion. You will certainly die but it is left to you to select the manner in which you die.”

According to Mr. Ephson, the views expressed by Majority leader Osei Kyei-Mensah-Bonsu to the effect that the party should go with a candidate from the north in 2024 has always been a matter for contemplation within the NPP.

He described the stiff opposition by some members and their posture as being intolerant especially those who took the liberty to insult the Suame MP for his views.

He observed that many of the personalities interested in the NPP candidature for 2024 are only hedging and using their supporters to raise dust and attack the Majority leader except for Joe Ghartey, who had publicly expressed his interest but then lost his ministerial position.

President Akufo-Addo, he said, will lose a lot of his influence as the 2024 elections draw near and therefore it will serve the NPP better to select its flagbearer long before the President begin to lose his authority in the party.

He said, “Rawlings was the same; Kufuor was the same. The NPP cannot stop it so they have to manage the rules and fast track it so that by 2023 the matter would be settled.”