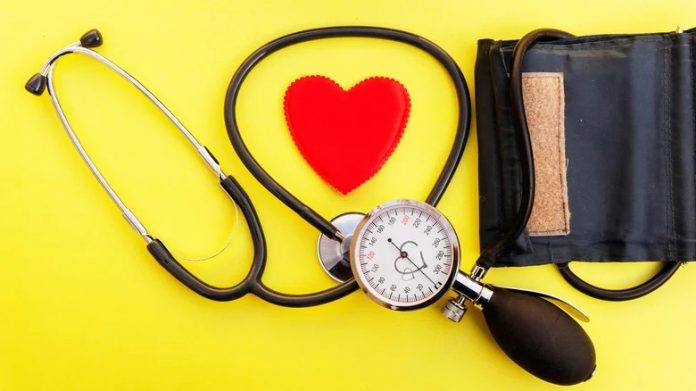 High blood pressure (or hypertension) amongst adults is frighteningly common. In the USA, almost half of all adults have high blood pressure, with the condition acting as a primary or contributing cause of death for almost a half-million people in 2018, according to the CDC. As a condition that can lead to a wealth of profound health issues, such as a stroke, heart attack, and kidney damage, finding ways to control your blood pressure is crucial; yet as the CDC shows, fewer than one in four adults who have hypertension are actively controlling their condition.

And, as with most things, it all starts with what we eat. If you’ve been diagnosed with high blood pressure, following specific diets like the DASH (Dietary Approaches to Stop Hypertension) diet, a diet program that limits high-sodium, high-saturated fat foods and promotes choices that provide blood-pressure-friendly nutrients, as the Mayo Clinic states, is a wise and healthy idea. But, if completely revolutionizing your diet feels daunting, don’t fret. At Health Digest, we’ve put together a simple starter guide, with seven foods to eat and seven to avoid, if hypertension is a concern. Let’s take a look at our top picks. 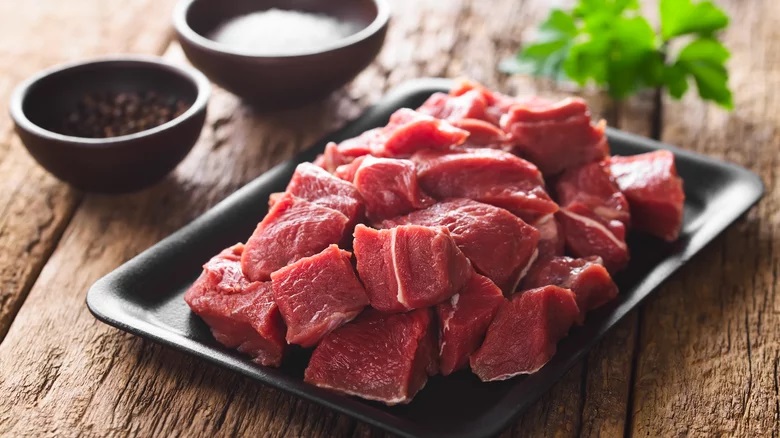 Beef often gets a very bad rap when it comes to blood pressure, with the meat (and other red meats) often cited as contributing to higher cholesterol and higher blood pressure, as Everyday Health says. However, when it comes to red meat, it may all be in the cut you choose, and how much you eat. “Lean cuts of beef, in smaller portions, can be part of a healthy lifestyle,” states registered dietitian Justine Hays, who practices in Buffalo, New York, to Livestrong. “These cuts of beef, much like lean poultry and seafood, can provide nutrients such as protein, iron, vitamin B, and zinc.”

When lean beef is included in a DASH-style diet, emphasizing foods that can help to control blood pressure, it’s been shown to contribute towards better blood pressure levels. A study published in the Journal of Human Hypertension found that a “moderate-protein, DASH-like diet including lean beef decreased SBP [systolic blood pressure] in normotensive individuals,” with “normotensive” meaning those who had normal blood pressure already, states MedicineNet. As such, when choosing your meat, try and avoid cuts that could contain higher levels of saturated fats. 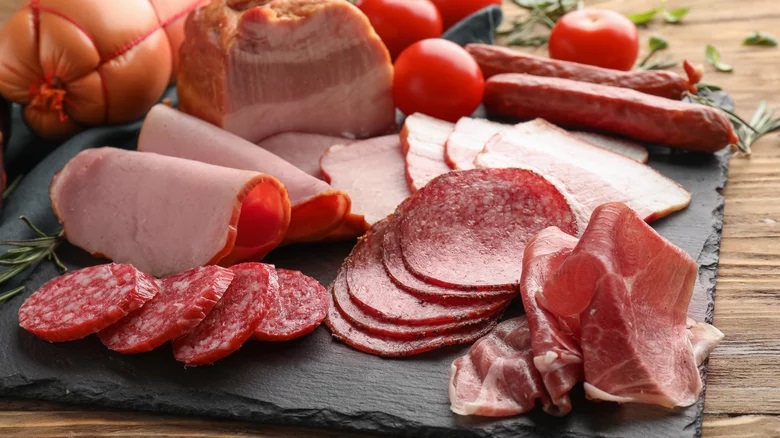 There’s no denying it: the salty, sharp taste of deli meat is delicious. Unfortunately, it’s also your blood pressure’s worst enemy. “In general, deli meats can be a convenient, pre-cooked source of protein. However, consuming multiple servings a week might pose a risk for those with high blood pressure, heart disease, or women who are pregnant,” advises registered dietitian and owner of Stirlist, Amber Pankonin, to Eat This, Not That!. These meats are, more often than not, highly processed, and contain a huge amount of sodium — the consumption of which is a huge risk factor for elevated blood pressure.

With just one ounce of deli turkey meat (often considered to be healthy due to its lower fat content) containing more than 500 milligrams of sodium, according to Eating Well, it’s a huge amount in such a small serving. Instead, try and look for low-sodium options, or cook the meat yourself so you can control the level of sodium present in what you’re eating. Watching your sodium applies to everything you’re consuming if you already have high blood pressure, says Pankonin. “Monitor blood pressure levels regularly and choose foods and beverages that are lower in sodium,” she adds. 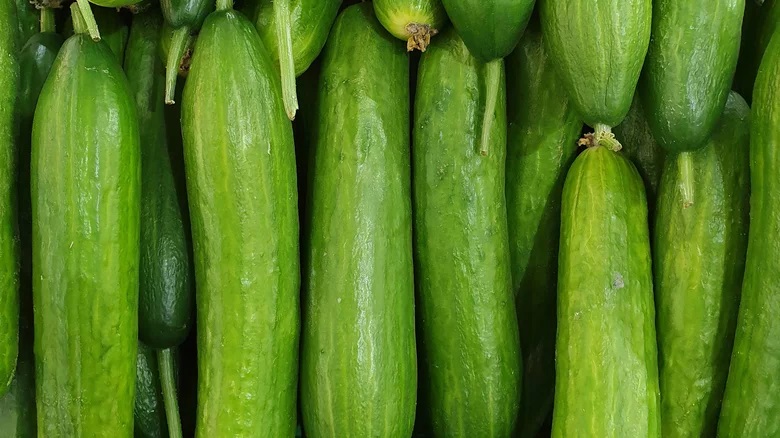 Who’d have thought that the humble cucumber could be so beneficial for your blood pressure? It’s all down to their unique balance of potassium and sodium, according to Livestrong. One cup of sliced cucumber contains around 4% of your daily recommended intake for potassium, says Live Science, as well as great levels of vitamin K, almost no sodium, and much fewer calories than other foods of equivalent potassium levels. Potassium is not only important for hydration but can also help to keep blood pressure controlled and lower the risk of heart disease.

There’s also the fact that eating higher amounts of cucumber, as well as other fruits and vegetables, can help curb hunger levels, making weight management easier, as California-based dietitian Vandana Sheth says — and weight loss and control can be a huge factor in managing blood pressure. You don’t even have to eat cucumber whole to reap the benefits, either. A study conducted by Public Health of Indonesia found that drinking cucumber juice had a significant effect on lowering blood pressure among the elderly (although the study’s authors do indicate that further study is needed to examine this effect in more detail). 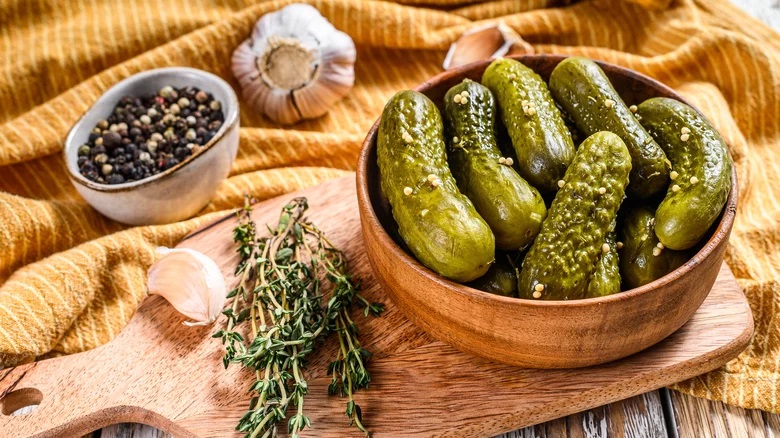 While cucumbers can be great for blood pressure, once they morph into their saltier, more-sour pickle form, it might be game over. Pickles are pretty bad for blood pressure, due to the high levels of sodium that are present in most pickle products, states WebMD. A single pickle spear can contain around 326 milligrams of sodium, according to the USDA. When you consider that the daily recommended sodium intake for adults is 2,300 milligrams or less (per the FDA), that’s an extraordinary amount of sodium for something you can eat in just a bite or two.

An Iranian study published in Clinical Nutrition Research seems to confirm the link between higher blood pressure and pickles. The study found that there seemed to be a “significant association” between the consumption of pickles and higher blood pressure, as well as obesity. The higher levels of sodium in pickles (and other pickled vegetables aside from just pickled cucumbers) can also lead to added strain on the liver and kidneys. If you’re a big pickle fan, try and seek out low-sodium options, or you can make them at home pretty easily with much less sodium than store-bought, as Diabetes Food Hub shows how to do. 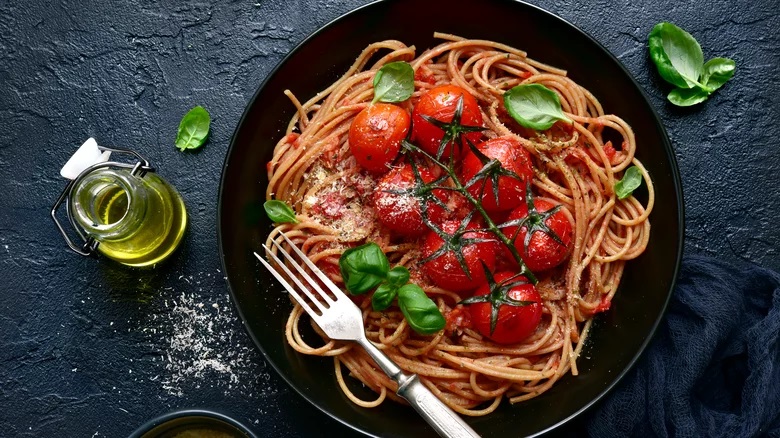 This one might have a few folks breathing a sigh of relief: yes, pasta is not off the menu if you have high blood pressure. Just make sure it’s whole-grain. According to the Mayo Clinic, the DASH diet, as well as the heart-healthy Mediterranean diet, both recommend consuming approximately three ounces a day of whole grains, including whole-grain pasta, as part of your daily intake. These fiber- and nutrient-rich grains come loaded with potassium and can help to reduce blood vessel damage and lower your chance of insulin resistance — all contributing towards healthier blood pressure.

However, if you’re choosing whole-grain pasta, watch what you’re pairing it with. Jarred pasta sauces can be pretty much the worst thing for your blood pressure, due to their sometimes extraordinary amount of sodium per serving. Some spaghetti sauces can have 1,000 milligrams of sodium per cup serving, states Everyday Health, almost half of an adult’s recommended daily intake. Instead, seek out sauces that are low-sodium or make your own at home, and try to keep in the spirit of the DASH or Mediterranean diets by pairing your pasta with fresh vegetables instead of high-fat meats.