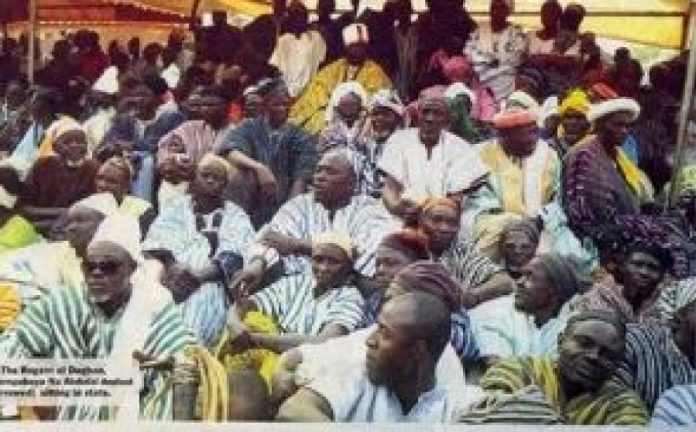 The family has also pushed back widespread allegation that the arrested man was a frustrated family member sent to assassinate the Andani Regent, Kampakuya Na Yakubu Andani and some palace elders to pave way for a decade’s old wish of performing the funeral rites of a contentious king, the late Naa Mahamadu IV.

Palace guards and military forces stationed at the precinct of the Gbewaa palace intercepted 26-year old Musah Muniru who jumped a wall into the palace-yard and was headed to the regent’s room.

Occupants of the palace who witnessed the midnight attack told Ultimate News’ Eliasu Tanko the military retrieved a seven round firearm and four bullets from the suspects but police contradict the report saying only four live ammunition was found.

No one was hurt and the attack did not also spark tension between the feuding families but there was escalating suspicions that the rival Abudu family was behind attack.

Spokesperson for the family, Alhassan Dokurugu said details of the suspect provided by police showed he was neither a close nor extended member of the Abudu family.

According to him the suspect was a native of Bimbila and had come to Yendi to attend a funeral ceremony adding the family has no ties with the suspect and without knowledge how he strayed into the Palace.

“That person is not known to the Abudu family and he doesnt come from Yendi in the first place. I don’t see why the Abudu family would want to attempt a thing like that: it is far from the truth”

‘The Bolinlana palace and for that matter the Abudu family has nothing to do with that and so any attempt to link the person or his activities to the Abudu family is out of place”. Mr. Dokurgu told Ultimate News.

Mr. Alhassan said the Bolinlana (leader of the Abudu faction) has been informed about the incident and he supports police investigation into the matter.

The suspect is currently in police custody facing charges of illegal entry and possession illegal weapon according to a police source.

Yendi, seat of the Dagbon Traditional Council, has remained volatile since 2002 when the Gbewaa palace was attacked leading to murder of Ya- Naa Yakubu Andani II and some 40 sub-chiefs.