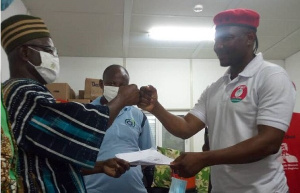 The immediate past National Chairman of the People’s National Convention (PNC), Bernard Mornah, has successfully filed his nomination forms as he prepares to clinch the Nadowli/Kaleo parliamentary seat in the impending general election.

Flanked by tens of supporters, Mr. Mornah personally filed his nomination forms at the Nadowli/Kaleo District office of the Electoral Commission at Nadowli in the Upper West Region on Thursday, October 8, 2020.

It was an electrifying atmosphere at the EC’s office Thursday afternoon as many supporters, well-wishers, and observers flocked to the premises of the EC in Nadowli to give Mr Mornah a thunderous welcome.

The supporters thronged the EC’s office unannounced ahead of time upon hearing that Mr Mornah would be filing his nomination forms on the day.

“Vote for Bernard Mornah, he is not a stranger. He is the only person who can bring real development to the people of Nadowli/Kaleo,” the supporters chanted repeatedly as Mr. Mornah made a triumphant entry to the EC’s office.

Three officials of the EC, led by the Returning Officer for the Nadowli-Kaleo Constituency, Mr. BraimahIddrisu, cross-checked and validated the documents and particulars presented by Mr. Mornah.

In an interview after the process, Mr. Mornah described the manual verification process adopted by the EC as tedious and cumbersome and urged the commission to “adopt modern ways” to make the processes convenient.

Mr. Mornah contested the Nadowli/Kaleo seat in 2016 but lost to Mr. Alban Bagbin, who has represented the constituency in Parliament for 28 years but will not be contesting this year’s election.

Describing himself as a “worthy replacement” of Mr. Bagbin, Mr. Mornah said he was more than prepared for the contest and expressed full confidence that he will secure not less than 60 per cent of the total vote cast.

“There is no doubt that the grounds is more than fertile and manured that sons and daughters, mothers and parents across the constituency are yelling for Anbataayela Bernard Mornah as a worthy replacement of the venerable Alban Bagbin who has served our constituency, nation, continent in a manner unequal.

“One thing is certain that the image of Nadowli Kaleo has been lifted to a certain level by Alban. It is important to continue from where Alban left so that we will be able to attract the needed development and lift our people out of penury and our poor state of being and ensure economic emancipation of our people,” he said.

Mr. Mornah assured that he will leverage the networks and connections he has developed in the country and abroad to drive massive development in the area.

He mentioned tourism and agriculture as the key development areas he will focus on and promised to ensure that the numerous tourist attractions in the area are revamped and publicised to attract investments to the area.

He also pledged to support the youth, particularly those with special talents and support them to turn their capabilities into wealth creation.

“Tourism in this part of our area has not been developed at all. It is important to know that in other places, Unbowura alone will become a huge source of revenue.

The Sombo and Guree Porcupine Sanctuary should become a huge source of employment for our people.

The Sankana slave caves and Vogonni mangrove will serve as avenues of employment and revenue. There are many other tourist attractions that ought to be developed and well packaged to attract development to the area and Ghana at large,” he said.