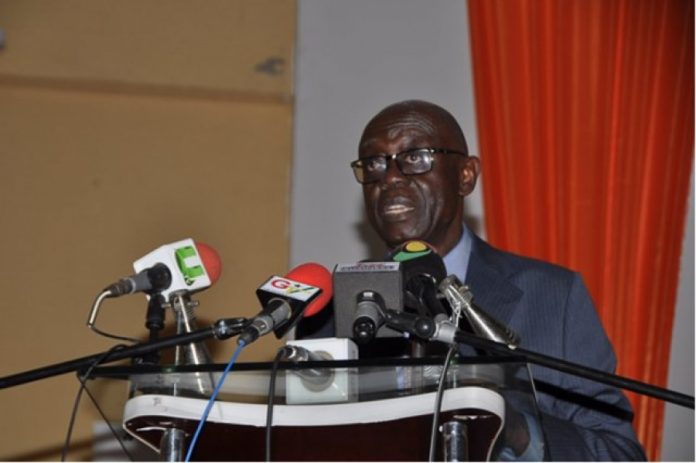 The largest Indigenous oil marketing company posted a 58.7 percent increase in profit after tax and recorded a 26.95 percent increase in turnover compared to that of 2015. This was announced at the 48th Annual General Meeting in Accra by the outgoing Board Chairman Professor William Asomaning.

The Oil Marketing Company which declared a dividend of 0.025 cedis per share to shareholders also welcomed a new Board of Directors headed by the Former minister of state, Hon. Kwamena Bartels

Briefing Shareholders of the performance of the company in the year under review, the outgoing Board Chairman, Prof. William Asomaning said, “GOIL achieved 95.8% of its fuel sales target in spite of the tight competition in the industry. Despite a fall of about 5.6% in national consumption of fuel products, the company grew fuel sales by 9.8% during 2016, LPG sales grew by 30% compared to 2015. Lubricant sales also improved by 11% compared to 2015.  He noted that GOIL remains the biggest OMC with a market share of 18.2%”.

Prof. Asomaning stated that the right issue undertaken by GOIL in 2016 raised additional capital of GH¢150 million which enabled the company to undertake key projects among which are the fully automated 3-tank storage facility at Takoradi Harbour to store and supply Marine Gas Oil (MGO), to meet the ever increasing demand by supply vessel, the construction of a bitumen plant and lubricant blending plant in Tema. He announced a dividend payment of GH¢0.025 per share to shareholders.

Photo: Patrick A.K. Akorli – MD of GOIL explaining a point during questions and answers time at the AGM

Handing over the baton to the new Board Chairman, Prof. Asomaning thanked GOIL for the co-operation over the last eight years.

The new Board Chairman of GOIL, Kwamena Bartels acknowledged the good work done by Prof. Asomaning and his team and assured the new Board, Management, Staff and Shareholders that his team will continue the good work begun by the former board to bring more success to GOIL during his tenure.

The Managing Director and Group CEO of GOIL, Mr. Patrick A.K. Akorli assured Shareholders that his team will continue to work harder with the new board to increase the company’s market share.