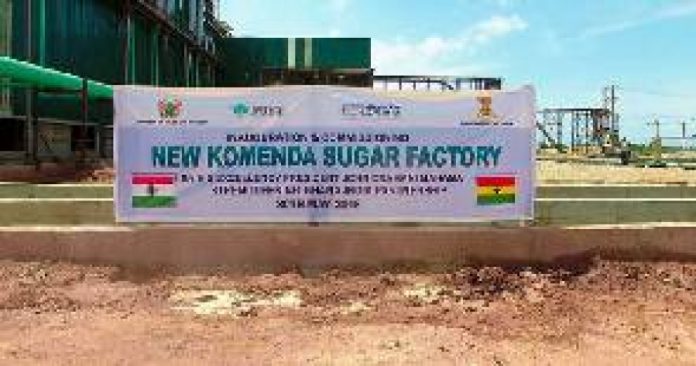 According to him, the government will continue to create the necessary conditions for the production of sugar and reduce the over reliance of imported ones and eventually cut down the high import bills.

Explaining the strategy by the government to achieve its objectives, Mr. Grant however said the NPP administration will adopt a private sector participation approach in realizing the objectives.

“We want to push as much private sector participation in some of these ventures…government does not have the fiscal space to invest because its revenue have all been tied up to expenditure,” he said.

“Whereas there are government initiatives on the ground, we will also encourage the private sector to play a bigger role in bringing in businesses and expanding our industrial base.”

The erstwhile NDC government revamped the Komenda Sugar Factory in May 2016 after several years of inactivity.

The recommencement has since been met with challenges including impact of illegal mining (galamsey) activities that were reported to have affected the availability of fertile lands for the cultivation of sugarcane to feed the factory.

The GIPC boss’s comment also follows a recent visit to Mauritius with the Vice President, Dr. Mahamudu Bawumia and some private and public sector delegation.
The African country is known for its ability to grow its economy largely with the sugarcane plantation that forms majority of its agriculture and industrial base.

“I went into an agreement with Mauritius Institute of Sugarcane Research Institute to collaborate in the area of capacity building to support the cultivation of sugarcane in Ghana and they have already shown interest in Northern Ghana to create sugar estates,” Mr. Grant said.

Already, the Integrated Water and Agricultural Development Ghana is engaged in the empowering people and improving livelihoods in the Northern part of Ghana (Sisili-Kulpawn) through the substantial production volumes of sugarcane.

The IWAD has also advocated the need for processing facilities to create value addition to the production chain.

Currently Ghana’s annual sugar requirement is estimated at close to four hundred thousand tonnes and the factory is expected to produce value added by-products such as energy and alcohol to support industry.