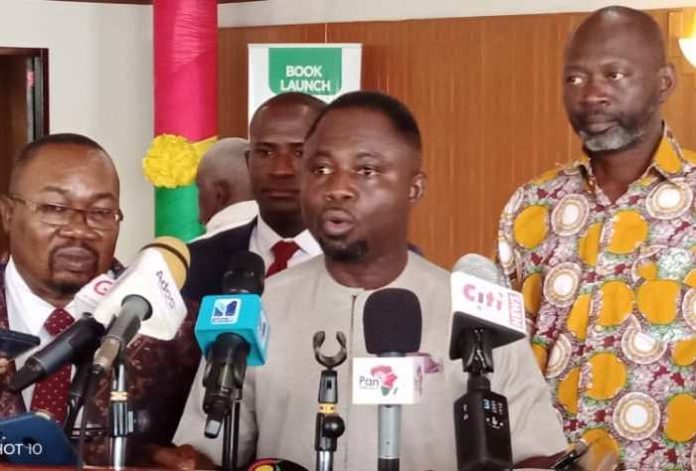 Ranking Member of the Parliamentary Select Committee on Health, Kwabena Mintah Akandoh has described as unconscionable government’s continuous retention of monies collected in the name of health insurance.

The National Health Insurance Authority (NHIA), he said, has been rendered incapable of meeting its obligations to service providers and threatening the well-being of patients.

According to him, hospitals across the country have begun demanding upfront payments for medical consumables and services because of the government’s failure to honour its obligation.

This, he said, is likely to increase morbidity in persons with hypertension, diabetes, sickle-cell anaemia, HIV, and other conditions who require regular intake of medical consumables and services resulting in undue stress on already overburdened medical facilities.

Speaking to the media in Parliament on Wednesday 16th November, 2022 the Ranking lamented there appears to be a concerted effort by the government to collapse the NHIS by depriving it of funds.

He said, “The highest release of NHIL levies collected was in 2016 when 86% of collections were released to the NHIA. The lowest on record is that of last year where government out of the GH¢2.056bn it collected paid only GH¢127m or 6.2% to the NHIA fund.”

Hon Akandoh disclosed the Private Health Facilities Association of Ghana has threatened to pass on top-up payments to NHIS clients who use their facilities.

This threat, he said, follows warning by the Ghana National Chamber of Pharmacy (GNCOP), the Pharmaceutical Manufacturers and the Pharmaceutical Importers & Association of Ghana (PMAG), and the Wholesalers Association of Ghana they were no longer going to give credit to health facilities citing the unprecedented levels of inflation and the non-payment of claims by the NHIA as reasons for which they are withdrawing all credit lines to health facilities.

According to him, the Minority expected government to intervene with appropriate measures such as transferring to the NHIF all outstanding collections of NHIL and SSNIT contributions as mandated by the National Health Insurance Act 2012 (Act 852) Section 52(1) but this intervention never happened.

The Ranking warned if nothing is done the country could witness high morbidity among patients who lack resources to pay for services of healthcare providers or delay their visit to hospital.

Hon. Akandoh cautioned the Finance Minister to as a matter of urgency release all collections of NHIL to NHIF without delay.

“The current situation of owing claims far above the statutory limits cannot be acceptable under these precarious economic situations.”

“Government must, as a matter of urgency, revert to the regular and reliable schedules as envisioned in the NHIA Act and report to parliament as required,” he stated.

The Minority pleaded with manufacturers, importers and wholesalers of pharmaceuticals and private health service providers to delay the imposition of top-up costs to reduce mortality and morbidity even as they try to engage government on the matter.