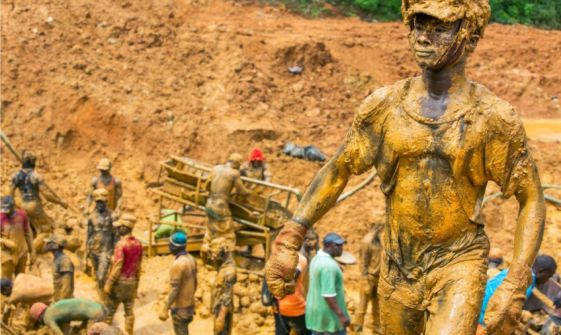 The General Secretary of the General Agricultural Workers Union (GAWU), Edward Kareweh, has hit hard at government’s community mining project describing it as  “galamsey”  in disguise.

The Akufo-Addo-led government through the Lands and Natural Resources Ministry recently established and launched two community mining sites at Ahanta West and Jomoro municipalities all in the Western Region.

“It’s pathetic. If you go to GREL  plantation, you have community mining being commissioned in the plantations with state support. How can you do this? how can the two coexist? who is regulating their activities,” he bemoaned.

Mr Kareweh stressed that the current situation, if not checked, could have rippling effect on the whole plantation of GREL as the community mining site is gradually developing into a community.

He stated, “ the mere presence of it with the backing of duty bearers is unacceptable“.

This, he believes is a political investment by the government in power out of fear of losing votes without considering its implications in the future.

He intimated GAWU is conferring with management of GREL and may petition the Ministry of Agriculture, Ministry of Lands and Natural Resources as well as the President.

He said government’s idea of establishing a community mining site in the GREL plantation was ill-advised and problematic.

He also added that during his visit to the Western Region, he noticed that a large track of cocoa farms has been lost to illegal miners popularly known as galamsey.

“When you’re entering the region from cape coast, the road needs to be expanded to six lanes, and when you are going to Apowa beyond Tarkwa and all that, you can’t have a single lane for such an international route,” he said.